Threat From Above: Drones Are Dropping Grenades on Russian Tanks 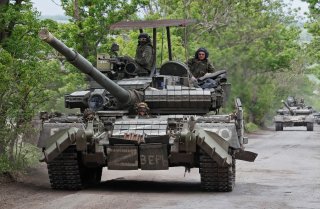 Interestingly, the grenades themselves were originally made in the Soviet Union to use against German tanks toward the end of World War II.

“The Russians invented a hand grenade. It was a shaped hand grenade that you could throw at a tank. And if you hit it, you could knock a tank out. And that was a result of them not being able to knock out German tanks with the stuff they had,” Mike Mears, former director of human capital at the CIA, told The National Interest in an interview.

Mears explained that Soviet soldiers had to be close enough to the tank to throw the grenade which usually placed them in the line of fire. This tactical scenario, and the risk it involved, partly inspired the creation of the longer-range rocket-propelled grenade (RPG).

However, following the arrival of the RPG, the Soviet Union still had thousands of these small 30mm and 40mm grenades sitting around in warehouses.

“Some enterprising Ukrainian thought ‘you know, if I took these things, and I got a 3D printer and put little fins on them, and then I could take them up in a drone and drop them. What havoc I could raise in trenches and so forth,’” Mears said. “Think of the innovation to do that. Nothing like that has occurred on the Russian side. Absolutely nothing.”

Attacking Russian forces with grenades dropped from drones is precisely the kind of asymmetrical advantage Ukrainians have leveraged against a larger mechanized adversary.  Dispersed groups of dismounted Ukrainian soldiers could use terrain or buildings to their advantage to launch attack drones armed with grenades from obscure or hidden positions.

It is not clear how many countermeasures, sensors, reactive armor, or active protection systems Russian tanks have but it is widely known that they are more vulnerable to airborne attacks. A small hand-launched drone could simply drop explosives from the sky above Russian armored vehicles without placing Ukrainian soldiers directly at risk. Given the large numbers of these left-over grenades, they may serve as a long-term supply of ammunition to support drone attacks.

“The Russian playbook is up, run off left tackle, and let's play it over and over and over again, because that's in the book. And the Ukrainians are just showing incredible adaptability,” Mears said.