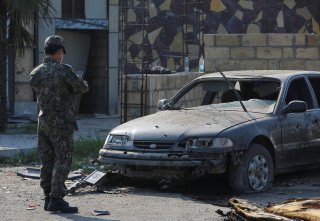 The guns are now silent across Nagorno-Karabakh as Russian peacekeepers take up positions along the ceasefire line. Even at the best of times in Washington, DC, attention spans are short, but in a political season dominated by recounts and a presidential transition, even more so. Congress, however, has broader responsibilities than just to posture for partisan gain. With elections over, the Senate and House intelligence committees should instead focus on investigating the three intelligence failures which the Nagorno-Karabakh conflict exposed.

First, is the obvious: Was the United States caught unaware by the outbreak of war? Skirmishes between Armenia and Azerbaijan were nothing new, but the conflict that erupted in late September was orders of magnitude greater than any fighting since the original 1988–1994 Nagorno-Karabakh war. In hindsight, it is clear that Baku coordinated its war plans with Ankara. On March 26, 2020, Deputy Secretary of State Stephen Biegun signed a waiver to Section 907 of the Freedom Support Act certifying that Azerbaijan was committed to resolve its disputes diplomatically and so enable the continued provision of American military aid to Baku. Did Biegun and the State Department lie? Or were they deceived by Azerbaijan? Why was the U.S. Embassy in Baku caught so unaware?

The second involves Russia: The foundation of the Minsk Group process was a diplomatic solution. Chaired by Russia, France, and the United States, the group has the backing of fifty-four other states, including Turkey, Armenia and Azerbaijan. Over its more than quarter-century existence, the Minsk Group had outlined a basic framework for the dispute’s resolution: Basic autonomy for Nagorno-Karabakh, an end to hostilities between Azerbaijan and Armenia—perhaps greased by opening borders between Armenia and both Turkey and Azerbaijan, and the gradual return of Azerbaijani districts outside Nagorno-Karabakh occupied by Armenian forces in exchange for peace to be guaranteed by Scandinavian peacekeepers. Heydar Aliyev, the father of the current Azerbaijani dictator Ilham Aliyev, appeared to have accepted the agreement only to back away at the last minute. The flood of American aid into Azerbaijan after Aliyev joined the post–9/11 “war on terror” disincentivized further compromise. Russia’s end-run around the previous agreement should raise questions: Did Russian president Vladimir Putin simply see an opportunity to insert Russian troops into the region and seize it? Or was he using Russia’s participation in the Minsk Group as an asymmetrical warfare strategy to distract or tie down the United States with insincere diplomacy? The answer to this question has reverberations far beyond the Caucasus as the United States considers multilateral arms agreements with Russia.

The third involves Turkey. As analysts and diplomats examine events, one of the greatest uncertainties involves the backroom dealings between Putin and Turkish president Recep Tayyip Erdoğan. What is known is that the two leaders hashed out the basic ceasefire agreement in a private phone call and then presented it to Aliyev and Armenian prime minister Nikol Pashinyan as a fait accompli. What remains uncertain is whether the Russo-Turkish agreement had any other components to lead Putin seemingly to abandon Armenia. Indeed, there is increasing speculation in Armenia that the two leaders may have horse-traded their Syria interests: Turkey guaranteed Russia paramount interests in Idlib in exchange for Russia’ support for Turkey having a role in a joint peacekeeping center in territory seized from Armenian control, as well as the establishment for a pan-Armenia corridor to allow Turkey to penetrate more directly into the Caucasus and Central Asia.

The outcome of the Nagorno-Karabakh region sets back U.S. interests considerably. Armenia’s democratic revolution is under threat, a new wave of refugees strains the region, Russian influence in Azerbaijan, which has already grown against the backdrop of neglect from both the Obama administration and Trump administration, has increased further still. Additionally, an anti-American regime in Turkey has succeeded in inserting itself and battle-hardened and, in some cases, terror-linked mercenaries into the region. The State Department and U.S. intelligence community were seemingly caught flat-footed. It should be a bipartisan imperative for Congress and other oversight elements to determine why.