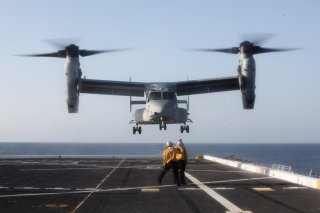 Soldiers and Marines hit by enemy fire often have only a short window of time during which airlift MEDEVAC can save their lives. But airlifting injured service members in combat presents a set of complex and interwoven challenges. The speed of an airplane is necessary to arrive in time for the injured soldier to survive, while the hovering and vertical landing capabilities of a helicopter are necessary to maneuver in fast-changing combat environments.

Offensive air assault raids over enemy territory are also heavily dependent on speed and agility, as soldiers need to arrive on location, drop from the air, strike the target, and exit before being seen or attacked by the enemy.

Missions of this kind require vertical take-off and landing capabilities and airplane-like speed and range, a blend of operational attributes difficult to combine into a single aircraft. Bell’s V-280 Valor Tiltrotor, now being assessed by the Army for its Future Long Range Air Assault (FLRAA) program, seeks to provide both of these key attributes. Bell developers drew upon breakthroughs in propulsion technology, avionics, and aircraft design to develop a new tiltrotor able to hit speeds as fast as 300 knots and travel twice as far as the existing Black Hawk utility helicopter.

A tiltrotor such as the Bell V-280 Valor is uniquely positioned to perform time-sensitive missions, as it can reach its intended location with the speed of an airplane and operate with helicopter-like maneuverability and hovering capacity. A V-280 would, for instance, be able to land in a congested urban environment without needing a runway or landing strip. This brings an enormous tactical advantage if soldiers need to be evacuated under the threat of an impending enemy attack.

The implications of building an aircraft with these abilities are far-reaching, as they can massively decrease risk by removing the need for what the Army calls forward arming and refueling points, or FARPs. This kind of operational capability is aligned with the Army’s requirements for the FLRAA program, which aims to introduce breakthrough combat ranges for helicopters.

A valuable 2017 report in the Journal of Marine Engineering & Technology explains how cutting-edge tiltrotor designs are built to “go-beyond” the limitations associated with helicopter flight. “Helicopters also have major limitations in terms of weight, speed, and range due to their aerodynamics. Tiltrotor technology was developed to overcome the aforementioned limitations. Aircraft can benefit from the lift generated by wings and utilize main rotors as devices for vertical take-off, landing, and after tilting, as well as for providing thrust required for the forward flight in classic airplane mode.”

The airplane-like “lift” provided by the wings is engineered to operate in coordination with the agility and low-altitude hovering ability enabled by the rotors, adding stability while ensuring maneuverability.