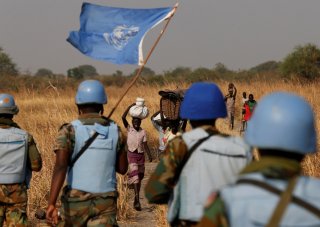 As the United States and China are escalating their global competition, Africa is emerging as a new battlefield. Thus, keeping stability and supporting pro-Western governments there should be a top U.S. priority. However, in many places, tribal and Islamist rebels are undermining stability. A key tool for that strategic objective is the United Nations funding of peacekeeping operations. However, the UN’s performance remains deeply flawed. Africa is facing a dual-threat: from China and the radical Islamist militias. The Biden administration needs to step in—and fast. On July 29, the UN Security Council will hold a meeting on Central African Republic sanctions– a crucial strategic flashpoint in the heart of the continent.

Problems with this and other conflicts abound. On June 30, the Fifth Committee of the United Nations in charge of administration and budget approved a $6.37 billion budget for twelve UN peacekeeping missions from July 1, 2021, to June 30, 2022, however, these funds are allocated to incompetent and often corrupt forces.

Peacekeepers are deployed to war-torn nations to protect civilians and enforce domestic peace accords and international treaties. Most missions have taken place in Africa, where UN forces have attempted to quell civil wars and distribute humanitarian aid. However, these operations have often failed to provide reliable protection and long-lasting peace, with operational ineptitude, bureaucratic hurdles, and corruption hampering success.

UN peacekeepers failed to wrest control of Somalia from the Al Qaeda-affiliated Al Shabaab in 1991-1995. Following the civil war, the UN brokered a ceasefire agreement and deployed personnel to distribute aid to the famine-beset Somali civilians. Without a central Somali government, however, the UN could not seek consent to deploy troops to counter violent warlords. The peacekeeping mission was limited to ceasefire observation.

In 1993, UN forces attempted and failed to disarm Somali militias. After a short stint, the United States and European Union both pulled their troops from the mission, and the UN Security Council voted to significantly downsize the mission.

Today, Somalia suffers from ungovernability, severe impoverishment, and crumbling infrastructure. In addition, Al Shabaab have practiced the highest levels of violence that have rendered the current African Union peacekeeping a “mission impossible.”

Unlike in Somalia, the UN has committed significant resources to peacekeeping in Mali. However, operations remain largely feeble. The mission has entered its seventh year, intending to provide protection for civilians, support a national dialogue of reconciliation, and enforce previously negotiated peace settlements.

In 2015, the Malian government negotiated a peace agreement with several rebelling Tuareg militia groups. However, it did not address growing threats from Islamist extremists. Mali has become the center of Jihadist operation in Africa and until recently, the French-led Operation Barkhane was the sole effort targeting Islamic State and Al Qaeda cells in the region.

Though over 18,000 well-equipped UN peacekeepers are currently stationed in Mali, Islamists continue regular violent attacks. As France suspends Operation Barkhane, UN forces will be left without a reliable military counterpart. Lacking direction, Mali is likely to descend into further chaos.

The UN experiences in the Central African Republic (CAR) mirror those in Mali.

On April 10, 2014, the UN Security Council authorized the deployment of a “multidimensional” peacekeeping force to protect civilians, facilitate transition, and promote humanitarian assistance in the CAR. A year earlier, the CAR suffered a coup d’état in which mostly Muslim Seleka rebel groups deposed President François Bozizé. In response, an alliance of opposition paramilitaries named “Anti Balaka” was organized to counter Seleka. This marked the beginning of a lengthy civil war.

While the government has struggled to contain the violence, the peacekeeping mission has failed to protect civilians. In 2018, the Union Pour La Paix En Centrafrique (UPC), an ex-Seleka militant group, murdered upwards of 100 people at a Catholic mission. The peacekeepers charged with protecting the mission reportedly retreated in an armored vehicle to their base instead of defending against the UPC incursion.

In 2019, Doctors Without Borders alleged UN peacekeepers were ineffective in preventing several attacks targeting civilians in Batangafo, which hosts over 20,000 displaced persons.

Former President Bozizé returned to the CAR in 2019 to contest the 2020 presidential elections. However, his candidacy was declared invalid, and he became the leader of the anti-government coalition. In December 2020, the Coalition of Patriots for Change (CPC) was formed, which united several of the most powerful militant groups of CAR.

After the CPC’s failed attempt to take Bangui on January 13, 2021, the Central African Armed Forces (FACA) launched a counteroffensive, gradually recapturing major cities from the rebels. According to a recent UN report, “…widespread international humanitarian law violations committed by CPC- affiliated groups included the forced recruitment of children, attacks on peacekeepers…sexual violence and the looting of humanitarian organizations.”

The current president, Faustin-Arcange Touadera, has relied on his military, assisted by Rwanda and Russian instructors, in the fight against the CPC. According to a recent report by the UN Security Council, Russian contractors, posing as instructors, allegedly led operations, targeting civilians. In turn, the United Nations Multidimensional Integrated Stabilization Mission (MINUSCA) withdrew from the conflict. With limited prospects for peace, UN forces in the CAR are likely to operate without much success.

The inability to protect civilians from rebel groups leads to discontent among the population. Demonstrations are regularly held in the capital and in the regions demanding that MINUSСA leave the CAR. In June and July, peacekeepers killed a motorcyclist in the capital Bangui and tried to pass off the victim of a hit-and-run as a militant. Protests followed when a crowd laid down the dead civilians at the steps of the prime minister’s office.

In addition, the presence of Russian military contractors in Africa is likely to cause Russia’s influence there to expand. Countries interested in achieving rapid success against radicals and rebels may turn to Moscow despite Washington’s opprobrium. As a result, the UN missions will continue to lose their influence and the ability to solve the tasks assigned to them.

The U.S. State Department should work with other UN members to ensure that peacekeepers are properly trained to engage enemy combatants, providing operators with the means and equipment to identify, track and destroy militant groups, while cutting their finances and building positive relationships with civilians.

To restore their operational effectiveness, UN officials must increase the accountability of mission commanders. Formal investigations into the failures of peacekeeping operations without significant changes will preserve the status quo and lead to more victims and instability.

The time has come for a deep reform of UN peacekeeping operations.

Wes Martin, a retired U.S. Army colonel, served in the Army Military Police and in law enforcement positions around the world.