Is The Time Right For A U.S. Navy Base In Australia? 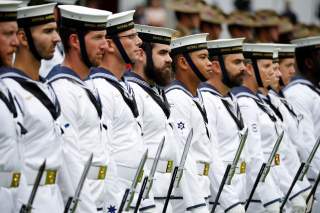 The U.S. Naval War College’s James Holmes, a strategist of serious stature, has suggested that the U.S. Navy should establish a ‘massive’ base in Australia. This isn’t Holmes’s first stab at this. His initial proposal, back in 2011, apparently received the ‘gimlet-eye’ treatment from the would-be hosts.

Maybe there’s a touch of tongue-in-cheek to the ‘massive’ framing? If Holmes was hoping to provoke a rise from Down Under, the reaction from Australian commentators this time around has been more deadpan than gimlet-eyed. But a proposal this bold deserves a response.

I’ll have a go then.

Australians pride themselves on their reputation as a dependable ally on the battlefield. But they are more reluctant to yield up slices of their plentiful territory for foreign military use. The only enduring U.S. base on Australian soil is the joint intelligence facility at Pine Gap. The secret to its longevity is that it is rooted in an equitable burden-sharing arrangement.

That mutually beneficial arrangement has underpinned bipartisan support and enabled successive governments to argue that the national interest is served and sovereignty maintained. Australia also plays host to a sizeable Singaporean military contingent, for training purposes. Singapore pays its way and has incrementally acquired a reputation for respecting sovereignty.

Training is one thing. Hosting combat forces is another matter. In 2011, President Barack Obama announced the establishment of a rotational U.S. Marine Corps detachment at Darwin. This was a political initiative designed to underscore the U.S. rebalancing commitment to the Indo-Pacific. It has taken almost a decade to realise the modest total of 2,500 marines originally envisioned, and there have been torturous cost-sharing negotiations along the way.

The result is an expensive and somewhat attenuated Marine Corps presence that is neither fish nor fowl. The Northern Territory offers useful training opportunities, but less strategic value than widely assumed. Without sealift, the Darwin detachment is hobbled as an amphibious force.

If the U.S. were to invest in a new naval facility in Australia, a port near Darwin—without Chinese leaseholders this time—would be an obvious candidate and useful to the Australian Defence Force besides. However, well-placed U.S. defence sources say that recent media claims that Washington is constructing a new naval base in the Top End are wide of the mark. The U.S. is investing substantial sums in joint infrastructure, following the plan laid out under the force posture initiative. But none of it is specifically earmarked for naval use. Meanwhile, Australia’s Defence Department is investing exclusively in upgrading existing naval facilities in the Northern Territory.

New U.S. bases in Australia are not part of the current alliance conversation. Instead, access and adaptability are the watchwords at a military level. The U.S. and Australia already conduct large joint exercises, like Talisman Sabre. The U.S. Air Force has sent visiting detachments of increasing complexity, including an F-22 squadron complete with embedded Australian pilot. And the marines are in Darwin for half the year.

But the U.S. military is likely to move away from concentrating high-value assets in fixed locations, as portended by the current Marine Corps planning and guidance. Building a big facility in Australia would be going against the strategic grain, not to mention budgetary realities.

Holmes is on the money in emphasising the importance of Australia’s geography, as a central Indo-Pacific anchor point. Australia offers extensive Indian Ocean and Pacific frontage and proximity to Southeast Asia. But it remains infrastructure-poor, while the terrain beyond the more habitable southeast and southwestern corners is challenging.

If Australia was willing to offer up territory for a base, in response to an American request, the U.S. Navy would face the same challenges that have deterred generations of Australians from developing the country’s northern half. The Royal Australian Navy itself remains decidedly bottom-heavy, dividing its fleet between Sydney and Perth, despite periodic calls for more dispersed basing. These bases lie much closer to the Southern Ocean than to likely areas of U.S. strategic interest further north.

Even the new joint base being developed by Australia and Papua New Guinea on Manus Island, on the site of a former American fleet base no less, offers only marginal positional advantage for the U.S. Navy, despite Washington’s interest in joining as a partner. Manus will matter more as a hub for regional engagement and capacity building with Pacific island nations than for classical power projection.

Holmes correctly identifies Australia as occupying a sweet spot: not too far from the focal points of U.S. strategic attention in the Western Pacific, nor too close to China’s layered defences for sea and air denial.

Yet he also contends that Australia lies ‘just outside’ the South China Sea. Darwin, Australia’s jumping-off point into the archipelago, is 2,600 kilometres from the South China Sea—roughly the distance between Los Angeles and New Orleans. Moreover, navigating across Indonesia can throw up knottier obstacles for warships than just the tyranny of distance.

To be sure, in wartime, or full-blown crisis, Australia’s relative remoteness would be a valuable asset for U.S. forces looking to disperse and obtain in-theatre support. But since Canberra would be likely to grant access to Australian facilities, it’s not clear that the outlays for a new stand-alone U.S. base would be justified.

Politically, the Morrison government evinces little appetite for quantitative or qualitative enhancements to the U.S. military footprint here, even as Australia’s geostrategic stock has risen in U.S. eyes. Even assuming Washington wanted to stretch its sea legs, Canberra would still be extremely cautious about the reaction from Beijing.

In August, the prime minister appeared to rule out of consideration the deployment of U.S. land-based ballistic missiles. That may be the U.S.’s fault for starting post-INF hares running prematurely. But the PM’s hasty response nonetheless suggests an underlying nervousness about hosting ‘permanent’ U.S. strike capabilities. And nothing says permanent quite like a massive military base.

Australia’s alliance with the U.S. is at an odd disjuncture. Militarily, the trend is towards closer force integration and defence technology cooperation, creating capability uplift. Yet questioning among U.S. military allies about Washington’s political commitment has never been so intense. Canberra’s diplomatic hedging and extreme sensitivity about offending China raise U.S. eyebrows too.

State premiers might actually be more inclined than sailors or cabinet ministers to welcome a new naval base and all its associated goodies—provided Uncle Sam is paying the overheads, of course. Then again, nobody throws gimlet eyes quite like the purse-holders up on Capitol Hill.

This article originally appeared at the Australian Strategic Policy Institute.