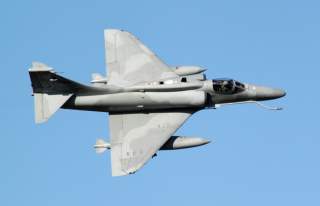 The Argentine navy has had a rough few decades. It lost ships and sailors fighting the Royal Navy over the Falkland Islands in 1982. Political upheaval and economic depression robbed it of funding and support. Sanctions constrained modernization efforts. Ships rusted out. Some sank. More sailors died.

Now the Argentine navy is set to lose two more of its larger, oceangoing “blue-water” vessels, potentially shrinking the fleet to just a handful of operational warships that increasingly are suitable only for coastal, “brown-water” missions.

“The Argentine navy is consistently turning from a blue-water navy to a brown-water one,” LATAMilitary reported. “if no corrective measures are taken, this will only continue to fall towards the shoreline.”

Then in July 2019 the Argentine navy announced it would scrap the frigate Heroina and the corvette Rosales.

Heroina suffered from post-Falklands sanctions. “An embargo was imposed by the United Kingdom in the aftermath of the South Atlantic conflict of 1982,” LATAMilitary explained, “but as money continued to get to the navy, there was no shortage of spares.”

Decades later, this embargo was being lifted progressively until a diplomatic escalation between Argentine president Cristina Fernandez de Kirchner and [U.K.] prime minister David Cameron produced an export-control resolution by Her Majesty’s Government to limit any import of goods to repair or upgrade and the export of these and/or new products with the Argentine armed forces as the end user, in cases that could be detrimental to the U.K.’s defense and security interests.

Nonetheless, upon improving bilateral relations since the Macri administration took office, a request to lift such a restriction “on a case-by-case criteria” was provisioned by Sir Alan Duncan in June 2018.

This past decade, a critical component of the ship’s gearbox had been damaged, and the navy decided to export it back to the U.K. to be repaired or replaced. It was automatically seized by U.K. Customs and as of yet has not been recovered.

Such a situation combined by the ever-increasing budget cuts left the Heroina stranded at its home port. Right after that, many components and electronics were removed for conservation purposes and even were cannibalized for spares, this is allegedly turning the recommissioning of the frigate both unlikely and costly.

“Something similar happened to the Rosales corvette,” LATAMilitary explained. “Apparently damage to its diesel engines and propeller shafts were deemed costly and complicated to repair, especially after an extensive repair performed on the ARA Espora after she collided with a commercial ship in Bahia Blanca when moored.”

But now the navy plans to dismantle Rosales and several other ships in favor of funding a new class of four, lightly-armed patrol vessels.

The navy isn’t the only Argentine armed service struggling to survive. The air force for years has been trying, and failing, to procure new fighters to replace an aging and shrinking warplane fleet.

British forces in 1982 shot down around a third of Argentina’s 400 warplanes, but in subsequent decades funding woes and mismanagement exacted an even greater toll.