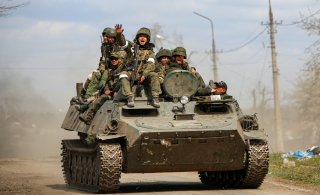 The Russian foreign ministry made the announcement, claiming that it had lodged a “strong protest” with the German ambassador in which it had declared the forty embassy personnel persona non grata. Up to 100 people, including the diplomats’ spouses and children, are being forced to leave the country as a result.

German foreign minister Annalena Baerbock acknowledged that Berlin had “expected” the move but argued that it was “in no way justified” as a response to Germany’s expulsion of what she argued were spies under diplomatic cover.

“[The Russian personnel] did not serve diplomacy for a single day” during their time at the Russian embassy in Berlin, Baerbock said, adding that they had “worked every day … against our freedom, against the cohesion of our society.” The German personnel, she added, were authentic diplomats who had “not done anything wrong” and were being expelled solely for political reasons.

Since the beginning of Russia’s invasion of Ukraine on February 24, more than a dozen European nations have expelled Russian diplomats under suspicion of espionage. The Kremlin has promised retaliation against each country and has often responded by expelling an equal number of the country’s diplomats from Russia, without regard for their function.

Russia’s foreign ministry claimed that Baerbock’s criticisms of its personnel in Berlin were “unacceptable” and “motivated by an absolutely false assertion.”

The Russian invasion of Ukraine has prompted a sharp reaction against Russia within Germany. Prior to the outbreak of hostilities, Berlin had pushed for reconciliation with Moscow and had refused to provide Kyiv with lethal military equipment. German leaders, including President Frank-Walter Steinmeier and former chancellor Gerhard Schroder, were also criticized for their close business ties to Russia—particularly Schroder, who continues to serve on the board of Russian natural gas company Rosneft.

After the invasion, however, the German government sharply changed direction, increasing its military budget and supplying the Ukrainian government with German-made missiles and other arms. Although Berlin has since ended its supply of lethal equipment, it has continued to provide maintenance and training.