Tomcat Down: Did Libya Really Shootdown a Navy F-14 Tomcat? 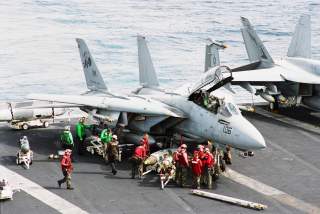 As reported by Tom Cooper, Albert Grandolini and Arnaud Delalande in their book Libyan Air Wars Part 2: 1985-1986, according to the blog by one of the relatives of the involved Libyan pilots, the two Su-22Ms were from No. 1022 Squadron LAAF, based at Ghurdabiyah AB, outside Syrte — a unit then under the command of Major Abdelsalam Djalloud. Commander of Ghurdabiyah AB was Colonel Dumuha Ramadhan Zaid.

The account of air combat between Tomcats and Sukhois is rather short. Libyan radars should have detected eight F-14s early that morning, of which two crossed the ‘Line of Death’ and thus — from the Libyan point of view — violated sovereign Libyan airspace over the Gulf of Syrte. Two Su-22s were scrambled from Ghurdabiyah AB in response, piloted by Captain Belkacem Emsik al-Zintani, and 1st Lieutenant Mokhtar el-Arabi al-Jaafari. The Sukhois climbed to an altitude of 7,000m (22,936ft) and received the order to ‘shoot down the intruders’.

As the two formations approached, al-Zintani saw two F-14s making a 180° turn — while still well in front of him — as soon as they saw the Libyan fighters. Knowing his Su-22 could not turn with Tomcats, al-Zintani made a right turn and what he only described as a ‘surprise manoeuvre’ — which should have brought him into a position directly behind one of the Tomcats. Moments later he fired a missile and ‘destroyed’ the F-14, supposedly killing its pilot, Commander Henry Kleeman. This account seemingly ignores the fact that the F-14A Tomcat was a two-seater, and does not mention the supposed fate of Lieutenant Dave Venlet, Kleeman’s radar intercept officer, with even a single word.

`Evidence’ for al-Zintani’s claim was provided in the form of a piece of wreckage found by local fishermen several days later: because the LAAF concluded this was a piece of Kleeman’s Tomcat, al-Zintani was subsequently credited with a confirmed kill and the wreckage in question put on display in No. 1022 Squadron’s ready room.

Immediately afterwards, the two Sukhois came under attack from six other Tomcats and both were shot down. Al-Zintani and al-Jaafari ejected about 75km off the coast of Syrte, and al-Zintani saw one F-14 ‘circling’ above him until he touched the water.

This account indicates that the situational awareness of al-Zintani and al-Jaafari was quite poor, while some parts of this narrative appear fabricated to ‘fit’ the legend. Namely, while Kleeman did make a near 180° turn ‘in front’ of two Sukhois, he did so only about 150m above and 300m in front of the Libyans. Because of the speed and relative positions of all the involved aircraft, there was no way that al-Zintani could put his Sukhoi behind the lead Tomcat — and certainly no ‘surprise manoeuvre’. On the contrary, because the Sukhois could not turn hard enough, they ended in front of Kleeman, with the USN formation leader subsequently going after al-Jaafari’s Su-22M. Zintani didn’t fire `by accident’: he opened fire at the F-14 he saw approaching him from above (Kleeman’s aircraft), without waiting for his R-13M missile to obtain a lock-on necessary to track its target. Even if the missile did obtain a lock-on — which is unlikely, considering the R-13M could not do so from the aspect from which al-Zintani had fired — it could not physically track a target moving perpendicular at that range and such a rate of closure, because this would be outside the limits of its seeker-head.

Finally, al-Zintani’s account also reveals that he actually never saw the second F-14, flown by Muczynski, who shot him down. Although rather cryptic in this regards, his account indicates that he was subsequently attacked by ‘six Tomcats’ and shot down. Surprisingly, while providing extensive details about his ejection, parachuting into the sea and hours of swimming while waiting for search and rescue (SAR) helicopter to find him, al-Zintani didn’t mention the fate of his wingman at all. As far as is known, al-Jaafari survived his downing and was also safely recovered.

Another interesting detail form this account is the narrative about a subsequent discussion between a person named only as `X’ and Gaddafi. According to this account, the Libyan leader was quite angered by the loss of two Su-22Ms and asked ‘X’ why they sent two rather ‘unsuitable’ fighter-bombers to intercept the F-14s. Djalloud came to the help of ‘X’, explaining that Ghurdabiyah was the nearest air base and that it had only Su-22s available at the time.

This might indicate that despite US warnings prior of the FON exercise in the Gulf of Syrte, the appearance of two F-14s south of the ‘Line of Death’ on the morning of Aug. 19, 1981 took the LAAF by surprise. This in turn resulted in a situation where Libyan commanders failed to take necessary precautions and deploy interceptor aircraft at this important air base.

Commander Henry Kleeman was killed – but years later: he piloted the F/A-18 of the USN squadron VX-4 that turned turtle following an aqua-planing-related landing accident at Naval Air Station (NAS) Miramar, in California (USA) on Dec. 3, 1985. Kleeman’s RIO from air combat with Libyan Sukhois on Aug. 19, 1981, Lieutenant David J. Venlet continued to serve with the USN and became Program Executive Officer for the F-35 Lightning II Program with the rank of Vice Admiral.