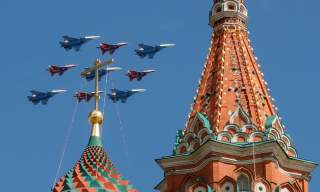 Key Point: Even though their airforce is not on par with the West's, doesn't mean Russia is weak.

With a maximum speed of 2,600 km/hour, the Su-57 or PAK FA leaves its Cold War cousins in the dust, and its range is also reported to exceed its predecessors. Some U.S. defense officials even speculate that the new Sukhoi fighter is more agile than the American-built F-35 (albeit, the F-35 wasn’t built for this purpose).