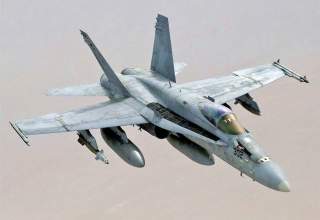 California's Rainbow Canyon, nestled on the western rim of Death Valley and lovingly nicknamed the 'Star Wars Canyon' by aviation aficionados, has been a favorite training ground for U.S. military aviators since World War II.

It's also, apparently, the backdrop of at least part of the upcoming Top Gun sequel.

Eagle-eyed amateur photographer Christopher Lohff captured a photograph of a Navy F/A-18F Super Hornet fighter jet careening through the Star Wars Canyon earlier in March, piloted by an aviator decked out in what appears to be the very same HGU-68/P flight helmet that popped up in earlier promotional material for Top Gun: Maverick.

It's likely that the Super Hornet is shooting some close-up pilot sequences for the upcoming sequel based on configuration of compact video cameras ringing the cockpit, per The Aviationist:

Another interesting detail in the photo is the appearance of an array of what appears to be four of the new Sony VENICE CineAlta video cameras on the coaming of the rear cockpit ... The Sony VENICE CineAlta array seen in the F/A-18 appears includes four rearward-facing cameras in the aft cockpit of the F/A-18 with various focal length lenses including at least two very wide-angle lenses. The camera array is fitted to the top of the rear cockpit coaming at the top of the instrument panel with a custom machined mount.

It's probably not Tom Cruise behind that helmet visor, even if the actor was slated to do some of his own flying for the film. But this means that some lucky naval aviator is going to have his skull immortalized in the next installment of the beloved franchise, which may just be the best bragging rights of all time.