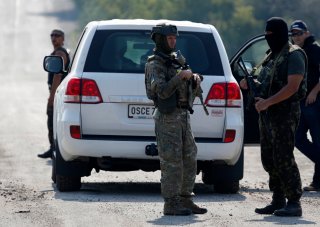 Kirill Stremousov, one of Russia’s most prominent occupation officials in Ukraine, was killed in a car crash on Wednesday, according to local authorities and Russian state media.

The press service of the southern Russian-occupied Kherson region confirmed Stremousov’s death to Russian media outlets. Authorities have not shared any further details surrounding the incident. There have been conflicting reports on where the fatal crash took place, with some sources alleging that he died near the port city of Henichesk along the Sea of Azov.

Ukrainian authorities have systematically targeted Ukrainians accused of collaborating with Russian forces in a string of high-profile assassinations. Oleg Boyko, deputy head of the Berdyansk military-civilian administration for housing and communal services, was killed near his garage along with his wife in September. Vladimir Saldo, the head of Russian-occupied Kherson, was previously hospitalized in Crimea as part of a purported poisoning plot. There is, however, currently no indication that Ukraine played any part in Stremousov’s death. Saldo, who returned to Kherson shortly after the poisoning attempt, confirmed reports of Stremousov’s death and said the official left behind five children, according to the BBC.

Stremousov, forty-five, was a blogger and local political activist associated with the Socialist Party of Ukraine, an organization banned by the Ukrainian government in June 2022. Stremousov espoused a stridently pro-Russian position during the invasion of Ukraine and was appointed by the Kremlin as deputy head of the Kherson Regional Administration in April. He was accused by Ukrainian authorities of treason for his role in aiding the Russian occupation forces. The occupation official posted regular updates on Telegram, denouncing Ukrainian forces as “Nazis” and “fascists” whilst also criticizing Russia’s missteps in the war. Stremeousov lashed out at top Russian defense officials last month over Ukraine’s battlefield successes, claiming that Russia’s Defense Ministry consists of “mediocre and corrupt generals and looters,” according to Newsweek. "Many people say that the Minister of Defense, who allowed this state of affairs to happen, could, as an officer, shoot himself," he added, referring to Russian Defense Minister Sergei Shoigu.

Stremeousov became a key local figure in Russia’s recent efforts to evacuate the city of Kherson amid a Ukrainian offensive in the region. In his last Telegram post, dated to Wednesday morning, Stremousov expressed optimism in the continued ability of Russian forces to repel Ukrainian assaults on Kherson. “At this stage, the situation is under full control of the Russian military,” he wrote. Russia’s overall commander in Ukraine, Gen. Sergei Surovikin, announced later that day the decision was made to withdraw Russian troops from the city.