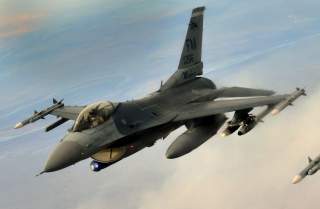 Development of what was to become the world-renowned Su-27 began in the 1960s by the Soviet Union in response to the threat posed by the new fourth generation of American fighters with exceptional range, heavy armament and great agility, but the task was long and arduous with the now-familiar Flanker production version not flying until 1981 and production not beginning until 1982.

As we have previously explained western aircraft usually probed Soviet air defenses during the Cold War. Those aircraft were often intercepted by Su-27s.

Noteworthy such actions continued unabated in post-Soviet days in the northern regions of Russia. As told by Yefim Gordon and Dmitriy Komissarov in their book Sukhoi Su-27 & 30/33/34/35, for example, in just three months of 1997 alone, the Russian PVO’s 10th Air Army radar units detected and tracked the movements of 20 ‘ferret’ aircraft and 141 foreign combat aircraft. P-3s, Boeing RC-135 ELINT platforms and other Western military aircraft ‘logged’ a total of more than 72 hours in the 10th OA PVO’s area of responsibility. On four occasions, Su-27Ps from the 941st IAP commanded by Sniper Pilot (a grade reflecting expertise) Col. Nikolay Ovechkin scrambled to ward off potential intruders.

‘I was all alone out over international waters and a good long way from the shore when a pair of F-16s popped up and, in a manner of speaking, asked me to step outside. They came within 50 m [164 ft]; I could see the pilots’ faces covered by oxygen masks. We were all armed with missiles. We followed parallel courses for a while, then started showing each other what our aircraft can do: wingovers, yo-yos and so on. It was a sort of mock combat. However, the tussle was brief, as at 10,000 m [32,810 ft] the Su-27 has an advantage over the F-16. Pretty soon the “guests” departed and I was all alone again. It felt good to know that they gave up and didn’t scare me off. Still, it’s quite possible they were merely getting low on fuel.’

However, despite the fact that the 941st IAP’s pilots repeatedly succeeded in preventing intrusions in the north-west of Russia, their flying skills deteriorated somewhat as time passed. By the autumn of 1997, 15 of the unit’s officers had no class rating at all or Pilot 3rd Class rating – right back to 1990. The reason for their failure to upgrade to higher ratings was the persistent fuel shortages making proficiency training all but impossible. In the first quarter of 1997 the 941st IAP accumulated just 1,500 flying hours instead of the planned 3,000 hours for this reason.