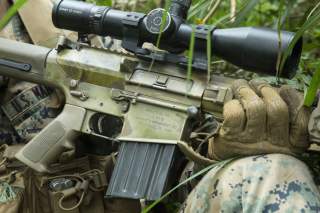 You wouldn’t guess any of this if you met him. Satterlee is soft-spoken and humble—to the point of almost being self-deprecating. Though confident in his abilities, he doesn’t brag.

Recent hit films such as Zero Dark Thirty, Lone Survivor and American Sniperhave put America’s special operations community in the spotlight like never before. It’s an odd turn of events for a community often called “the silent professionals.”

Satterlee says he ordinarily wouldn’t talk to a reporter. But another soldier encouraged him to share his story.

Satterlee says he has learned a lot about firearms in the world of competitive shooting. It’s influenced how he shoots—and why he came to recognize flaws in how the military prepares soldiers for war.

He’s the operations sergeant at JBLM’s Special Forces Advanced Urban Combat Course. After years of combat deployments around the world, training soldiers and shooting at civilian weapon ranges around the United States, he thinks it’s time we radically revamp the way we think about firearms training.

He says new approaches could save a lot of lives—soldiers and civilians alike.

Shooting things for a living

Satterlee grew up in the Pacific Northwest. He became familiar with firearms at an early age, and was an avid hunter. In those days, shooting was purely recreational, and he channeled most of his competitive drive into sports and athletics.

He joined the Army out of high school, and has been a member of elite fighting units during most of his career. His first assignment was the 2nd Ranger Battalion at what was then Fort Lewis.

While there, he befriended Lance Dement, a competitive shooter from Texas who later joined the U.S. shooting team at the 2000 Sydney Olympics. The two regularly spent time at civilian shooting ranges.

Then Satterlee joined the 1st Special Forces Group. While many units focus on making soldiers proficient in whatever weapons they’re assigned, Satterlee’s team pushed expertise for all the weapons in the operators’ arsenal. The range became a central part of life.

“They had a huge impact on my style of shooting,” Satterlee says.

Several tours in Iraq, Afghanistan and The Philippines put his skills to the test. He and his fellow operators launched raids, hunted terrorists and passed on their skills to local, allied troops.

These were often sensitiveoperations. The kind officials vaguely credited to “members of coalition forces” during press conferences.

Then Satterlee took on a wildly different assignment. He became an enlisted adviser to an ROTC program at a university on the East Coast—training college kids to be officers. It was very different from the special operations world.

For one, the ROTC’s training standards and leadership philosophies were far more conventional and rigid. But one of the biggest changes for Satterlee was that they didn’t have a shooting range. Access to—and training with—firearms was extremely limited.

He missed it immediately. To make up for the lost training, Saterlee began seeking out civilian shooting groups during his free time.

In short order, Satterlee became involved in the world of competitive shooting. Luckily, he found a large network of gun enthusiasts along the East Coast.

Many of the civilian hobbyists were much better shots than he expected. In fact, they were more than good—some of them gave the special ops warrior a run for his money.

“There were guys in their eighties—barely held together at the seams—who were out-shooting me,” he recalls.

It was a humbling experience—and an awakening for Satterlee.

He explains that competitive shooting used to be modeled around military and law enforcement practices. But over time, philosophies—and methods—evolved. Competitive shooters began introducing new variables.

These variables include different targets. The shooter would have to determine which ones constitute threats, and which ones do not. There’s shooting on the move, while trying to hit a target that’s also moving. All done under time constraints and considerable pressure.

“There’s no other sport or training that focuses on the draw, reloading, target acquisition, instantly being able to place accurate fire on a target while moving—and all this is done faster than any other sport with live ammunition,” former U.S. Practical Shooting Association president Mike Voight said in an interview with American Handgunner.

The Army’s marksmanship training hasn’t changed very much, while the wars we send soldiers to fight have.

“It can’t be ignored anymore,” he says. “At some point, we need to decide how good we want to be.”

He takes aim at many old school “secrets” to shooting that he believes derivefrom flawed reasoning. In particular, he lambasts the commonly repeated advice that shooters should “squeeze” the trigger in such a way that they feel surprised when the weapon goes off.

“I consider that a negligent discharge,” Satterlee says. He’s firm that surprise is never something a soldier should feel while handling a firearm.

“You should know when you’re going to shoot something,” he declares.

He said another faulty notion is the idea that the shooter should keep their focus on their weapon’s sight as they aim. “That’s good for bullseyes or a stationary target,” he says.

But in combat zones, things rarely stay in place. People constantly move—and if you focus on your optics, you can lose your target. Being aware of your surroundings is critical.

“You have to constantly assess the threat,” he explains.

Train how you fight

Satterlee explained that a lot of marksmanship training is still centered around “peer-to-peer” fighting scenarios—battles against other uniformed enemies with well-defined battle lines.

Today, soldiers often find themselves in much more ambiguous settings—dominated by militias, guerrillas and spies. A civilian might approach to give soldiers critical information about the enemy … or blow them up in a suicide attack.

Satterlee said that practical exercises should force shooters to make quick assessments and act decisively. He said he often wonders how many soldiers might be alive today had they not hesitated to ask for permission to act when they saw a threat.

“On the flip side,” he adds. “How many [civilians] down range might be alive that didn’t need to die?”

He said those questions are the biggest takeaways from his time deployed in the Middle East and Southeast Asia.

On the battlefield, soldiers have to make decisions quickly. But acting fast can’t mean acting in a rushed or sloppy way. You need to be very deliberate. Handling a weapon is a huge responsibility—as is taking a life.

Satterlee says that for a soldier’s sanity, he or she needs to know they’re doing the right thing when they take their shot. They need to feel confident that they can determine if the car approaching them is packed with explosives, or just a dad rushing to get home to his family.

“You can’t expect a soldier to adapt to chaos unless he’s already been exposed to it,” Satterlee says.

He says they need to train in an environment that simulates the uncertainty of a modern war zone, without its lethality. They need training that allows them to fail safely, and to reflect and learn from mistakes.

He’s taken his lessons from the world of competitive shooting and brought them to how he trains soldiers at JBLM. He’s a seasoned special operations veteran with years of experience—and one of the top shooters in the nation—so his commanders give him exceptional leeway to experiment in his training.

As a member of 1st Group, he’s in an environment that welcomes innovation and creative problem solving. His commanders trust his judgment. It’s an elite unit—everyone who comes through his doors for the urban combat course is handpicked.

But Satterlee says he doesn’t think this sort of training should be reserved for only the most elite troops.

He asserts that soldiers—especially new recruits—need to learn about the complexities of modern conflict much earlier. He says they need to learn how to assess threats and to know the consequences of both indecision andrashness.

He admits that it’s significantly harder to give large, conventional units that sort of training, compared to smaller and adaptable elite units. However, he proposes that the Army can impart these lessons with audiovisual aids and gaming-style training.

By their very nature, military organizations are highly regimented and steeped in tradition. But Satterlee says that when certain rules and traditions become outdated, these institutions can be painfully resistant to change.