Tough Love From the Pentagon to Congress 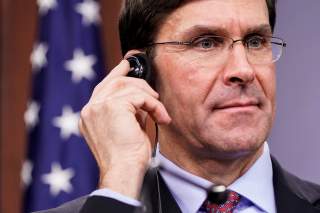 Secretary of Defense Mark Esper is smartly trying to prep the political battlefield by getting in front of emotional reactions to defense cuts with thoughtful analysis and rationale. Last night, the Pentagon sent a short report to Congress previewing controversial changes in the budget due to Capitol Hill on February 10.

Nothing was spared the ax in the spending accounts that fall outside of the military services. Basically, every enterprise-wide agency took a hit, which was part of the plan to flood the zone.

But this approach was also necessary to demonstrate the Pentagon’s commitment to its strategy. It was likewise done out of necessity since even with recent and substantial defense budget increases, money is still tight.

Pentagon leaders were quick to point out that there are no real losers in this review of work that is done outside of the uniformed services. A key line from the report states explicitly, “the impacted programs were not wasteful nor mismanaged, they were simply not [strategy] priorities.”

This now puts the burden on Congress because they’ve said they are all-in on the new defense strategy. But can politicians go so far as to approve cuts to cherished priorities to support the long-term competition with China and Russia?

While change is almost never pleasant, the Secretary of Defense made clear that the alternative is worse.

Without these shifts away from the “legacy missions” of the past, the money for the strategy would have to instead come from “existing warfighting capability in the military departments.” The secretary has basically charged Congress with backing up what they say they endorse.

The nearly $6 billion in savings from the defense-wide review will be reinvested elsewhere in the defense budget. Those priority investment areas include:

America’s rivals are mounting comprehensive challenges using military means and consequential economic, diplomatic, political, and informational tools. We are already playing catch up in competition — whether in technology, logistics, investments or relationships. These priority shifts are necessary and overdue.

Sec. Esper concludes his report to Congress saying boldly that “action” and “tough decisions” are required by Congress. The Pentagon has made their difficult tradeoffs, and now it needs a partner in the legislative branch.

Some of the proposals hit at the heart of perceived oversight responsibilities, including to eliminate “outdated Congressional reporting requirements,” shuttering “ineffective” boards and commissions, and defunding favored earmarked programs. But defense officials clearly believe that what they have been charged to do by the nation demands even this level of scrutiny and adjustment.

Whether or not Congress approves these changes, the Pentagon has signaled in this report even more aggressive reforms and cuts are ahead. Combatant commands and the military services are already undergoing the same level of inspection. Stay tuned.

Nor does the secretary intend to take just one bite at this apple. The report states that there was “insufficient time for a more exhaustive examination.” As such, all these same stakeholders are going to be put back under the microscope in the next 12 months, and ever more efficiency will be wringed out of them.

The Pentagon report concludes by stating “rigorous management and oversight” will be institutionalized as a result, along with “lasting fiscal discipline.”

This article by Mackenzie Eaglen first appeared at AEIdeas.