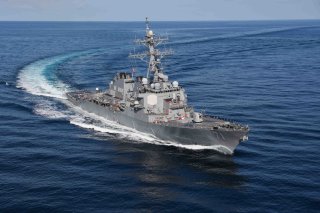 In order to minimize risks and costs, the U.S. Navy is intent on using tried and tested designs instead of betting big on risky new platforms.

The U.S. Navy will take charge of their upcoming DDG(X) guided missile destroyer to minimize design risks and ensure that the ship stays within budget.

During a Defense One conference earlier this week, Chief of Naval Operations Adm. Michael Gilday explained that the program must not run any technical risks.

“What we’ve done with DDG X is we brought in private shipbuilders, so that they can help inform the effort. It’s a team, but it’s Navy led. And so, both of the companies that produce DDGs are involved in that initial design. Our intent is to go into build with a mature design,” he said. “I think it’s important that the Navy maintain the lead on design,” Gilday said.

In recognition of the high costs and ultimate failure of other naval ship programs like the problem-plagued Littoral Combat Ship, the Navy is prioritizing risk reduction by incorporating already mature technology and off-the-shelf components and designs when possible.

“An example might be the shift from the Ticonderoga-class cruiser to the Arleigh Burke-class destroyer, where we use where we essentially use the same combat system, the same weapon system but the hull is different,” Gilday said.

“Our intent for DDG(X) would be much the same, that we would use a proven combat system on that ship. But we need a ship that has more space and allows for more weight and for capability growth over time,” he explained.

“An example might be hypersonic missiles, just based on the size of those missiles. We couldn’t fit those in a current Arleigh Burke, or even a Flight III. [DDG(X) is] a deeper ship, if you will, from that standpoint.”

The Navy would like to arm future surface vessels with state-of-the-art munitions, including hypersonic weapons and directed energy, i.e., laser, weapons that could potentially replace ship’s close-in defensive weapon systems.

“Technical risk has been a challenge for us,” Gilday said, citing the Zumwalt-class, the Littoral Combat Ships, and the Gerald R. Ford-class aircraft carrier. In “those three builds, we’ve accepted technical risks and it’s cost us in terms of keeping those ships, not only within budget, but also on schedule,” he added.

Having been burned in the past with radical new ship designs, Admiral Gilday made it clear that the new guided missile destroyers would be technically less ambitious than previous ship designs but that they would be less risky and, hopefully, more combat effective.