The Trouble With the Mujahedin al-Khalq 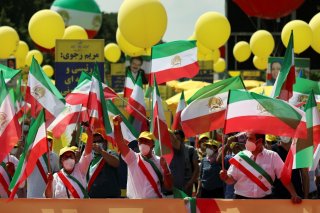 The Mujahedin al-Khalq (MKO) formed against the backdrop of the anti-shah opposition in the 1960s and evolved to become an important component of Ayatollah Ruhollah Khomeini’s revolutionary coalition. But Khomeini turned on the MKO as he consolidated his dictatorship. Unlike others forced out of power, persecuted domestically, or sent into exile, the MKO fought back: They both sponsored a terror campaign targeting regime officials—killing many innocent bystanders in the process—and they accepted Iraqi dictator Saddam Hussein’s protection, a move ordinary Iranians considered treasonous. Within Iran, the Islamic Republic is deeply unpopular. Khomeini promised Islamic democracy, but delivered a regime as dictatorial, more corrupt, and less tolerant than that which preceded it. Inside the Islamic Republic, Iranians remain curious about opposition groups. They watch diaspora television channels, following the opposition on Telegram channels, and ask about high-profile figures like Reza Pahlavi, the son of the ousted shah. About the MKO, however, they voice only opprobrium.

The hatred ordinary rank-and-file Iranians feel for the MKO is the group’s Achilles’ heel. MKO activists counter both by accusing anyone who criticizes them as being a regime agent and arguing that their record of success exposing Iranian secrets shows the depth to which they have infiltrated the Iranian regime. If the MKO is able to so deeply implant themselves in Iran’s most sensitive and security-conscious organs, the logic goes, it demonstrates that they both have support and are far better positioned as an opposition group than anyone else. The former is betrays crass amateurishness, and the latter is simply false.

Consider just how many exposés and supposed intelligence coups the MKO have bungled or gotten wrong. More than two decades ago, the group announced that Ahmad Behbahani, an alleged high-ranking Iranian intelligence officer, defected. Behbahani gave an off-camera interview to “60 Minutes” implicating Iran in a number of operations in which he claimed to play a central role. Much of what he said, however, was nonsense. Nor was the alleged Bebahani the age or height of the real figure. The MKO may have to attract attention to its own cause, but doing so threw a wrench into real investigations and created a situation in which the Islamic Republic could dismiss real evidence as fraudulent in the future.

Between 2002 and 2004, I worked in the Office of the Secretary of Defense as an aide on both the Iran and Iraq desks. When Iranians and Iraqis would request meetings with more senior leaders, I was a gatekeeper: I would sit down and do a preliminary meeting to understand their agenda and, ultimately, determine who in the Defense leadership they should meet, if at all. It was not uncommon for Iranian American activists from a range of organizations with very little presence or history to request such meetings. They would present us with documents purporting to be smoking guns of one sort or another.

Provenance was always a concern: How did the person in front of me or my colleagues acquire such a document? Without exception, when we investigated, the documents turned out to be fraudulent, and often had figurative MKO fingerprints on them. In effect, it was a time waste that distracted from the battle against Iranian terrorism and the regime’s nuclear program. Had any of those group members gotten through, the result would have been an embarrassment to top officials and a delegitimization of their work on Iran at a time when, according to subsequent U.S. National Intelligence Estimates, the Iranian nuclear weapons program was still ongoing.

In 2012, a website affiliated with the MKO said there had been a nuclear leak at an Isfahan reactor. Again, this was nonsense. Western journalists, however, often bite and give the group the publicity off which it thrives. The National Council of Resistance of Iran (NCRI), the MKO’s political umbrella and the same group that now sponsors lavish galas in France or Albania in which prominent politicians like Rudy Giuliani and former officials like Michele Flournoy speak in exchange for honorarium filtered through various front groups, often gives bombshell announcements about new discoveries in Iran.  On February 24, 2015, Ali Reza Jafarzadeh, NCRI’s deputy director, gave a presentation at the National Press Club in Washington, DC, in which he purported to expose a new secret uranium enrichment facility. “Despite the Iranian regime’s claims that all of its enrichment activities are transparent,” Jafarzadeh said, “It has in fact been engaged in research and development with advanced centrifuges at a secret nuclear site called Lavizan-3.” It turns out, however, there was less there than met the eye. An image the NCRI provided of an “underground hall” was actually a screenshot from a company making safes. Nor did the facility have the electrical infrastructure necessary to run an operation Jafarzadeh described.

The MKO purports to derive their intelligence from a spying network not only in Iran but also inside the Islamic Revolutionary Guard Corps. A 2016 report about atrocities in Syria, however, suggests the MKO relies less on secret access and more that the organization recycles Israeli, American, and Iranian media reports, for example, with regard to Qods Force training of Iraqi, Afghan, and Pakistani militias. Likewise, while the group reported that the Iranian Martyr Foundation in Syria pays Syrian mercenaries, none of this is new. The Foundation was hardly secret, however. It has a line item in the Iranian budget each year. In 2007, the U.S. Treasury sanctioned it.

The Trump administration was burnt in 2018 when the White House justified some of the president’s claims about Iran’s military spending by citing a Forbes article written by Heshmat Alavi. Alavi, however, does not exist but rather seems to be the creation of MKO operatives in Albania to play the American press. Forbes was not the only publication the MKO fooled. The Hill, The Federalist, al-Arabiya, and the Daily Caller also published Alavi. The problem was not Alavi’s arguments as much as the methods with which the MKO operated. Rather than win debates, the group increased the Islamic Republic’s ability to avoid them by citing the bogus claims.

This is not to say the MKO and NCRI are always wrong: The group was most famously responsible for publicizing word of Iran’s then-covert enrichment facility at Natanz. The U.S. government, however, knew about Iran’s covert work several months earlier. While the MKO says its exposés are proof of the degree of its infiltration, a more plausible explanation is that the intelligence services of other countries use the group to launder information. In the case of Natanz, many regional countries that may have known about Iran’s covert nuclear enrichment could have provided the information to the MKO in order to inject it into the public sphere while maintaining their own plausible deniability. There is also the question about exposés that blindsided even the MKO. If the MKO had really infiltrated Iran’s nuclear program to the extent they claim, then why did the organization not know in advance about the covert nuclear archives that Israeli agents spirited out of the country?

The MKO is correct to condemn incoming Iranian President Ebrahim Raisi for his role in the 1988 massacres of several thousand political prisoners. Everyone should. But having been the victims of persecution in the decade after they helped bring Khomeini to power does not change the fact that the MKO’s tendency to cry wolf hinder and obstruct the real fights against the Iranian regime, Iranian terrorism, and the Islamic Republic’s covert nuclear program.