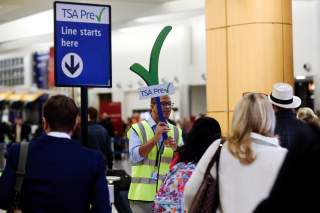 The Department of Homeland Security is proposing a rule that would allow the government to use facial recognition data to identify everyone traveling to and from the country, including U.S. citizens.

Non-citizens traveling through U.S. airports have been required to get their fingerprints scanned and have their picture taken since the mid-noughties. American citizens have enjoyed the choice of opting out of this requirement. However, in a recent regulatory filing, DHS is pushing to require all international travelers — including U.S. citizens — have their photograph taken.

“The Department of Homeland Security (DHS) is required by statute to develop and implement a biometric entry-exit data system,” the proposal reads.

“To facilitate the implementation of a seamless biometric entry-exit system that uses facial recognition and to help prevent persons attempting to fraudulently use U.S. travel documents and identify criminals and known or suspected terrorists, DHS is proposing to amend the regulations to provide that all travelers, including U.S. citizens, may be required to be photographed upon entry and/or departure,” the filing continues.

Facial recognition technology, which has become increasingly popular at airports across the country, matches an image taken of a traveler to a still image of them stored in a database.

Not only is the tech able to catch criminals and prevent fraudulent activity, it also can dramatically speed up processing times for travelers. The verification process can take less than two seconds and touts a 99% match rate, according to Customs and Border Protection.

Such a mandate for U.S. citizens is not totally unprecedented. The Orlando International Airport became the first in the nation in 2018 to require face scans of all arriving and departing travelers, citizens and non-citizens alike.

The director of exit-entry policy and planning at the Department of Homeland Security, Michael Hardin, told CNN Business that the proposal for all international travelers was in the “final stages of clearance,” but would not be implemented until the conclusion of a public comment period.