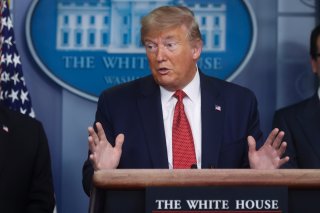 President Donald Trump on Thursday credited enhanced testing for the fact that the United States now has the most confirmed cases of coronavirus in the world—surpassing China, where the pandemic originated.

“It’s a tribute to our testing,” the president said during the daily coronavirus press briefing at the White House. “No. 1, you don’t know what the numbers are in China. China tells you the numbers.”

“We’ll have a good conversation, I’m sure,” Trump said. “But you just don’t know. What are the numbers [in China]?”

As for the U.S., he said, “We are testing tremendous numbers of people.”

The New York Times first reported that the United States had surpassed all other countries in confirmed cases of COVID-19, the infectious disease caused by the new coronavirus.

The Times based its conclusion on data from the U.S. Centers for Disease Control and Prevention, the World Health Organization, information from states, and other sources.

Even as left-leaning media outlets attacked Trump for referring to the coronavirus as “the Chinese virus” or “the Wuhan virus,” the Times acknowledged that “Chinese leaders … were slow to respond to the outbreak that began in the city of Wuhan, as local officials suppressed news of the outbreak.”

Chinese government officials have said the U.S. Army started the disease and planted it in Wuhan.

The Times said at least 81,321 Americans were infected by the coronavirus, and more than 1,000 have died.

That count is higher than the official government tally by the Centers for Disease Control and Prevention as of noon Thursday, reporting 68,440 cases of COVID-19 and 994 deaths.

The president continued to insist that much, if not all, of the U.S. economy has to reopen soon. He has suggested Easter Sunday, April 12, as a goal, but that California, New York, and Washington are among states or regions where it likely will take longer.

“We have to go back,” Trump said. “This is the United States of America.”

When Americans go back to work, they “are going to be practicing, as much as you can, social distancing,” he said. “We have got to start the process pretty soon.”

One day after Trump indicated he was going to stop using the term, a reporter asked the president whether China’s Xi had asked him to stop referring to “the Chinese virus.”

“Nobody spoke to me about it. I think it was fine, though,” Trump said, adding:

Ebola was named after a river in Zaire, now called the Democratic Republic of Congo, and Lyme disease after a town in Connecticut.

As for the coronavirus, New York is the hardest-hit state in the country. Trump announced that the Comfort, a huge Navy hospital ship, will depart Norfolk, Virginia, on Saturday and arrive Monday in New York Harbor to provide help for the state’s residents.

Trump said he would attend the ship’s departure in Virginia to “kiss it goodbye.”

The ship is “fully loaded with medical supplies,” he said.

Maintenance work was supposed to take three weeks, but the Navy completed the repairs much more quickly, Trump said he told New York Gov. Andrew Cuomo earlier in the day.

This article first appeared at The Daily Signal on March 26.