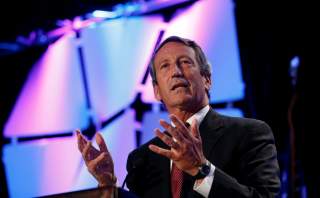 Sanford is the third Republican to announce a presidential bid against Trump in 2020.

President Donald Trump went after GOP challenger Mark Sanford after he talked about all the things that have allegedly “gone by the wayside” since Trump took office.

The former South Carolina governor and congressman said Monday on MSNBC’s “Morning Joe” that issues of debt, government spending, trade and other topics have been pushed aside since Trump took office. He added that “a lot” of Trump’s actions “are contrary to conservative philosophy,” but declined to answer whether he considers Trump to be a Republican.

“Joe, you were there in the early ’90s and we actually made improvements with regard to this issue of debt and deficits and government spending,” Sanford told host Joe Scarborough. “We actually saw a balanced budget during that time period. That has gone by the wayside, and I think that economic matters matter.”

He said there also need to be a conversation on foreign relations.

“Trade and free trade used to be a linchpin, what the Republican Party was about. It too has gone by the wayside,” he said.

Trump hit back at Sanford following “Morning Joe,” tweeting about his GOP challenger’s former affair and Sanford’s loss in the 2018 midterm elections.

“When the former Governor of the Great State of South Carolina, @MarkSanford, was reported missing, only to then say he was away hiking on the Appalachian Trail, then was found in Argentina with his Flaming Dancer friend, it sounded like his political career was over.” Trump wrote Monday.

“It was, but then he ran for Congress and won, only to lose his re-elect after I Tweeted my endorsement, on Election Day, for his opponent,” he added, referring to his support for Sanford’s opponent Katie Arrington in the GOP primary challenger. “But now take heart, he is back, and running for President of the United States. The Three Stooges, all badly failed candidates, will give it a go!”

Sanford is the third Republican to announce a presidential bid against Trump in 2020.