Trump Is Right: We're Making Up For Lost Time On Huawei 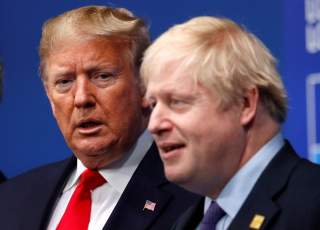 Belatedly, the Trump administration has a positive response to the Huawei challenge. But is it enough? This two-part series will chronicle the darkening prospects for the US campaign to ban Huawei baseline equipment from 5G networks. A second blog will analyze administration and congressional programs to replace Huawei equipment with alternate technology.

As I noted last week, UK Prime Minister Boris Johnson defied the Trump administration and signaled that Britain would allow Huawei to participate in its 5G rollout, providing up to 35 percent of so-called peripheral equipment. Johnson’s decision has been followed by a cascade of similar “compromises” across Europe, including a blessing from the European Commission (with the usual warning about dealing with untrustworthy vendors). Germany, Europe’s biggest telecoms market, seems poised to provide a partial go-ahead for Huawei.

The Financial Times explored the dilemma faced by the UK and other US allies in detail, labeling Huawei an “irresistible force.” For PM Johnson, the choices are stark. Having accomplished Brexit, he fervently believes that Britain must pursue a high-tech future, including the rapid deployment of 5G networks to underpin a future of artificial intelligence, the Internet of Things, quantum computing, and so on. There is also the reality — as with other European nations such as Germany and France —that the cost of ripping out existing Huawei equipment would run them billions of dollars and delay the technical and economic benefits of 5G. BT (formerly British Telecom), Deutsche Telecom, and Vodafone are all heavily invested in Huawei baseline equipment. Further, there is great doubt that Huawei’s chief rivals, Sweden’s Ericsson and Finland’s Nokia, will be able to match the company’s technology in the future. In 2018 Huawei invested over $15 billion on research and development, “far more than Nokia and Ericsson combined.” Finally, China is a major trading partner for many European countries, and it has openly threatened retaliation should Huawei be discriminated against.

Though US officials thus far have not overreacted to the British/EU decisions, the US now faces a huge challenge to its years-long campaign to exclude Huawei from the rollout of 5G networks. Washington urgently needs to fashion a response, or more accurately a set of responses. Here are several suggestions.

First, there is the threshold question of just how dangerous the threat from Huawei equipment is. European and now British leaders are championing a purported middle path, through which Huawei equipment will only be allowed in the periphery of the network. They claim that the threat from Huawei/Beijing can be “managed.” Many cybersecurity experts — not associated with the Trump administration — strongly challenge this claim, arguing that with 5G technology the line between baseline and peripheral will be erased, leaving the entire system vulnerable to malware and espionage. In a discussion with my AEI colleague Shane Tews and me last year, telecom expert Roger Entner argued that: “what the Europeans are saying and their ideas around security are an increasingly outdated way of doing wireless. It is the last days of dinosaurs where you have distinct network equipment.” He added that “in a 5G world, the base station becomes software and moves into the core . . . in 5G, because the equipment also becomes virtualized and is optimized on cloud infrastructure, Huawei doesn’t need the backdoor because it’s in the front door all the time.”

As a first step, the Trump administration should convene a forum of cybersecurity specialists — not affiliated with the US government — to analyze and thresh out the nature and depth of the potential security threat from Huawei equipment. This may not convince all nations —and economic imperatives may still prevail — but it would at a minimum give the US a more solid base from which to sustain its cautionary stance.

The point is that quite soon the US must make crucial decisions as to how it will enforce its longstanding warning that adopting Huawei 5G technology would jeopardize national security communications with its closest allies, particularly the Five Eyes. If it decides that a curtailment is necessary, international affirmation of the actual threat will be needed to buttress its case. But simply trying to thwart Huawei is not enough. The US has been derelict in offering alternatives to Huawei technology, both now and in the future. In the months before his Huawei decision, PM Johnson often plaintively called for plausible technology alternatives. Analyzing and sifting through alternative future courses of action should be a top administration priority. Part II of this blog will evaluate new administration and congressional initiatives to match the Huawei/Beijing “irresistible force” in 5G technology.

This article by Claude Barfield first appeared in AEIdeas.