Trump vs. Ilhan Omar: Why the Media Won't Stop Covering It 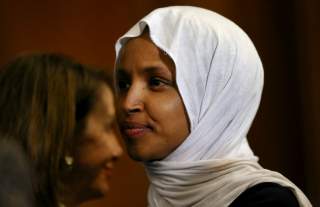 Journalists are still giving President Donald Trump a massive amount of media even after critics complained that reporters’ wall-to-wall coverage of the former real estate tycoon helped him win the presidency.

Trump’s decision to post several tweets telling Reps. Ilhan Omar of Minnesota, Alexandria Ocasio-Cortez of News York and others “to go back” to their own countries has all-but blanketed news media. His tweets also managed to elevate those lawmakers while simultaneously depriving Democratic presidential opponents of crucial coverage.

News articles about Trump generated more than 23.2 million interactions, according to NewsWhip, a social-media metrics company. The massive amount of media is a reminder that the president has the ability to drive media narratives, an argument that reporters often lamented after Trump’s victory in 2016.

Articles about the Democratic candidates earlier in July generated only a combined 6.5 million social media interactions in a week, the fewest since January, NewsWhip’s data show. The Washington Post and other outlets have published stories depicting Trump’s comments as racist and bigoted attacks against Ocasio-Cortez and three of her fellow progressive lawmakers.

The wave of coverage is having a profound effect on the political atmosphere.

Former Vice President Joe Biden, who is also running for president, for instance, saw his interactions tumbled despite rolling out his health care plan on July 15, which seeks to build on the Affordable Care Act (ACA) rather than attempt to dismantle it. Biden was not the only presidential candidate who couldn’t get out from behind Trump’s shadow.

Some critics argue that the media acted as Trump’s unwitting handmaids.

“Trump tortures us. Deliberately, yes, but I’m referring to the ways in which he keeps yanking our gaze his way. I mean the tough choices that he, more than his predecessors in the White House, forces us to make,” New York Times columnist Frank Bruni wrote in January. He was referring to what he believes is a difficult choice for reporters: focus on Trump or diversify their election reporting.

Former Secretary of State Hillary Clinton blamed the media for her 2016 loss to the president.

“Their real problem is they can’t bear to face their own role in helping elect Trump, from providing him free airtime to giving my emails three times more coverage than all the issues affecting people’s lives combined,” Clinton wrote in a her 2107 book “What Happened.”

Trump earned $4.96 billion in free earned media in the year leading up to the presidential election, according to data from tracking firm Mediaquant. The president received $5.6 billion throughout his campaign, more than Clinton, and Sens. Bernie Sanders, Ted Cruz, Marco Rubio combined. Trump’s campaign team is doubling down on Facebook and other social media spending as the president prepares for his reelection bid.

The president is spending roughly 44 percent of its Facebook ad budget on the baby boomer generation, Axios reported in April. Trump’s opponents are only spending 27 percent of their budgets on older generations, the report notes, citing data from Bully Pulpit Interactive. The president’s ad blitz is mostly centered around discussing immigration.