Trump vs. Kim: What If America Attacked North Korea? 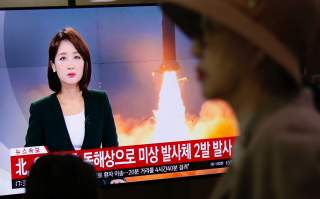 Key Point: A U.S. attack would be very costly.

Over the decades, North Korea’s long pattern of misbehavior and pursuit of nuclear arms have repeatedly led to calls for a military intervention in the country. In 1994, then president Bill Clinton nearly launched an air strike on the country’s Yongbyon Nuclear Scientific Research Center, which was believed to be on the verge of providing fuel for the country’s nuclear weapons. The strike was judged to have an excellent chance of success, but was called off after an agreement with then North Korean leader Kim Il-sung. Beyond the air strike, policymakers worried full-scale war might erupt that would consume the Korean Peninsula.

The problem has only grown more complicated over the past twenty-three years, as Yongbyon became operational and was promptly used to manufacture North Korea’s estimated stockpile of eleven nuclear weapons. Pyongyang’s large conventional forces, nuclear, chemical and biological weapons, and the fear of societal chaos in the event of government collapse have deterred its neighbors and the United States from further military action. How does North Korea deter the world’s lone military superpower, and how would it defend itself in wartime?

North Korea deters military action several ways. The first is through its large standing army, navy and air force. Although full of antiquated equipment and poorly supplied, the Korean People’s Army (KPA) has an active-duty force that is 1,190,000 strong, and as Lenin once said, quantity has a quality all its own. The armed forces have an offensive doctrine, and in the event of war would seek to capture Seoul as quickly as possible.

The North also discourages attack though its investment in nuclear, chemical and radiological weapons. North Korea may have only a handful of nukes, but nobody knows where they are, how they can be delivered and where they could be delivered to. The same goes for chemical weapons. KPA forces have recently been seen carrying backpacks with prominent nuclear-hazard symbols, leading to speculation they are trained to carry out attacks near and far with so-called “dirty bombs” and other radiological dispersal devices.

Finally, Pyongyang discourages outside intervention by feigning irrationality. Although often painted as “crazy,” the late Kim Jong-il and his son and successor Kim Jong-un are actually perfectly rational actors for the situation they find themselves in. The country stages attention-gathering attacks, such as the 2010 bombardment of Yeonpyeong Island, and instigates battles between the two Korean navies at sea, not only to garner attention, but also to give the impression that the country is unpredictable and any military action could spiral into all-out war.

In a practical sense, the country is not well equipped to defend itself. The country’s military technology, from early warning radars to tanks, was useful in the 1980s but is long past the point of replacing. Furthermore, a shortage in supplies and spare parts, particularly for sophisticated electronics, food and fuel, could prevent the military from mounting an effective defense.

North Korea’s first line of defense would be its intelligence, surveillance and reconnaissance assets. The country has more than forty coastal radars stationed on both west and east coasts, as well as coastal artillery guns of seventy-six millimeters and above. It also has fifty radar bases across the country that monitor the country’s airspace. Most if not all of these radars are thirty years old or older, and it is unlikely all of them are still in working order. As older systems, they are more easily countered by American and South Korean electronic-warfare assets. Still, their detection range is short, and even assuming they all worked, North Korea would have virtually no way to identify and monitor a regional buildup of air and sea forces arrayed against it. Like Saddam Hussein in 1991 and 2003, the first sign Kim Jong-un would have of military action would be the sound of explosions in Pyongyang.

North Korean forces would eventually crumble against a sustained assault. Although numerous, the Korean People’s Army relies completely on obsolete equipment that is no match for American and South Korean military forces. The much-touted artillery attack on Seoul would likely achieve some measure of initial success, but individual artillery units would quickly run out of ammunition or be destroyed by UN forces hunting them. North Korean submarines, deployed in enough numbers, might score a lucky hit against an allied naval vessel, and the Korean People’s Navy is known to have both sea-based and land-based copies of the modern Russian Kh-35 antiship missile.

The most dangerous possibility is that North Korea mimics the Iraq strategy and begins a guerrilla-warfare campaign against U.S. and ROK forces. Kim Jong-un could count on large numbers of politically indoctrinated, heavily armed individuals to wage guerrilla war against anyone trying to occupy North Korean territory, and as Korean history proudly shows, it is an excellent country for an insurgency. If the leadership were to go to ground in the country’s myriad underground facilities, it could direct a guerrilla war until occupying powers offered negotiations.

North Korea is a state built to protect the Kim dynasty, and as such it would be a formidable nut to crack. The irony is that as Pyongyang continues to fortify itself by developing nuclear-armed ICBMs, calls for military action against it steadily increase.The diminishing returns of the country’s nuclear program might make its leadership more open to negotiations. The alternative is so terrible it is difficult to contemplate.

Kyle Mizokami is a defense and national-security writer based in San Francisco who has appeared in the Diplomat, Foreign Policy, War is Boring and the Daily Beast. In 2009, he cofounded the defense and security blog Japan Security Watch. You can follow him on Twitter: @KyleMizokami. This piece was originally featured in May 2017 and is being republished due to reader's interest.