Trump Won't Like This: Iran's Clever Strategy of Pushback Is Working 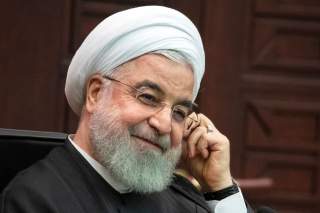 Key point: Iran is no match for America, but it is working hard to resist Washington’s pressure campaign.

Over the past three months, the U.S.-Iran conflict has gone from Washington's campaign of "maximum pressure" against Tehran to Iranian provocations that called the White House's bluff (and brought the region to the brink of war in the process) to a French-tailored diplomatic opening. Bloodied but unbowed, Tehran has endured Washington's sanctions, demonstrating to U.S. President Donald Trump that it has no intention of entertaining any of the United States' demands until it receives sanctions relief. The question now is whether, amid the glimmer of possible negotiations, the White House actually relents on sanctions or chooses to double down on its maximum pressure campaign to force through what it wants. That, however, is only likely to return the two foes to a stalemate — and lead the Islamic republic to kick off a new cycle of tensions in the hopes of finding succor for its ailing economy.

The White House wrongly assumed that hammering Iran in a campaign of maximum pressure would force Tehran to capitulate to U.S. demands for a far more stringent and comprehensive deal to curb Iran's nuclear and regional ambitions. To be sure, Iran is in deep economic pain: Inflation is hovering near 50 percent, foreign investment is largely frozen and the country's oil exports have dropped (estimates vary) to below 200,000 barrels per day — a far cry from the roughly 2.5 million bpd that the country was exporting before the White House pulled out of the Iranian nuclear deal last May. Nevertheless, the Iranian government is not flailing under heavy economic duress. Iran's central bank has managed to stabilize the currency in recent months, smugglers have resurrected illicit networks to sell oil and the government has imposed severe penalties on currency traders and businesses to restrict price gouging and prevent widespread unrest.

In addition to keeping a lid on its economic crisis at home over the past three months, the Iranian government appears to have succeeded in shaking Trump's nerves. After Iran was suspected of attacking several foreign oil tankers on May 12 and June 13, Iran on June 20 shot down a U.S. drone. That same day, Trump aborted a limited strike on Iran at the eleventh hour and, as revealed recently by The New York Times, instead ordered a U.S. cyberattack on a computer network used by the Islamic Revolutionary Guard Corps to plot attacks on tankers. Still, less than a month later, Tehran seized a British-flagged tanker in retaliation for London's seizure of an Iranian vessel for allegedly violating EU sanctions on Syria. While Iran is still in possession of the British tanker Stena Impero, authorities in Gibraltar released the Iranian tanker, Adrian Darya 1, in defiance of U.S. attempts to impound it. (Iran implied that it had managed to flout the sanctions when it announced on Sept. 7 that it had unloaded the cargo in Syria, but those claims are in question as the tanker still appears to be fully loaded.)

Iran has also spent the past three months carefully rebuilding negotiating leverage with its nuclear program. Starting in May, Iran announced that it would begin reneging on its commitments under the nuclear deal — the Joint Comprehensive Plan of Action (JCPOA) — every 60 days, all while making clear that it could rapidly reverse its moves if the Europeans make good on a pledge to provide Tehran with economic respite from U.S. sanctions. In May, Iran announced that it would increase its level of stockpiled heavy water and low-enriched uranium. Two months later, it said it would enrich uranium to 4.5 percent — above the JCPOA limit of 3.67 percent. And on Sept. 4, Iran declared it would lift limits on research and development work on its nuclear program. The next step could come on Nov. 5, when the Islamic republic could install advanced centrifuges, boost enrichment levels to 20 percent or revert to the original design of the Arak heavy water reactor. U.S. sanctions waivers on the nuclear program expire at the end of October and, if Washington does not review them, the Chinese company that is redesigning Arak to fulfill the JCPOA's nonproliferation requirements could run afoul of U.S. sanctions or, more likely, abandon the project altogether.

Ultimately, Iran's summer brinkmanship paid off. First, Tehran demonstrated that it poses a highly credible military threat to the Strait of Hormuz. Second, it exposed Trump's extreme reticence about engulfing the United States in another Middle Eastern war. Third, rather than bring European powers closer to the U.S. sanctions strategy on Iran, Tehran's threat to commerce in one of the world's busiest shipping lanes sent the Elysee into a diplomatic frenzy, paving the way for Iranian Foreign Minister Javad Zarif's surprise visit to the G-7 in Biarritz to discuss a French proposal for a $15 billion oil-backed credit line. Fourth, it laid bare the growing skittishness of Trump's Gulf supporters, who have a lot to lose from an actual war in the Persian Gulf. This is especially the case for the United Arab Emirates, which has quietly intensified its security and diplomatic discussions with Iran since late July and reduced its military commitment in Yemen, where Iran-backed Houthis have regularly targeted Saudi interests.

And fifth, the United States' struggle to cobble together a maritime coalition to deter Iranian tanker attacks exposed the diplomatic cost of the White House's unilateral policies on Iran: Only Australia, Bahrain and the United Kingdom have joined the U.S.-led mission. Japan, for one, says it will run its own patrols in the Bab el-Mandeb strait between Yemen and Djibouti as part of anti-piracy missions, while India is conducting independent patrols. And before Boris Johnson became British prime minister, London boldly said it would launch a European-led mission apart from the U.S.-led undertaking; Johnson has since reversed course to join Washington, but European defense chiefs are still debating an EU-only coalition. But regardless of which country is part of which mission, there are simply too many vessels transiting the narrow Strait of Hormuz and not enough military escorts to prevent Iran from launching further attacks. In other words, the United States (and its allies) are still faced with a massive dilemma in trying to deter the Islamic republic.

Getting an Audience With Rouhani

After an intense summer in the Persian Gulf, Iran and the United States are testing whether the time is ripe yet for diplomacy. While Trump confirmed — and even vaguely entertained — the French credit line proposal in Biarritz, the White House has since ramped up sanctions on Iran and reaffirmed its commitment to its maximum pressure strategy. As Brian Hook, the U.S. special representative for Iran, put it, "We can't make it any more clear that we are committed to this campaign of maximum pressure and we are not looking to grant any exceptions or waivers." Sigal Mandelker, the U.S. Treasury Department's undersecretary for terrorism and financial intelligence, reinforced that message when she asserted that "there will be no waivers of any kind for Iran's oil." That doesn't bode well for the French proposal, which requires U.S. waivers for the idea to even get off the ground.

Nevertheless, the White House has not categorically rejected the French proposal. And more than that, it is still striving to secure a face-to-face meeting between Trump and Iranian President Hassan Rouhani on the sidelines of the U.N. General Assembly this month. The Sept. 10 dismissal of U.S. national security adviser John Bolton, a hawk who has called for regime change and military action against Iran, may indicate that Trump is removing obstacles to a potential Iran negotiation. Trump has conveyed publicly that he at least wants negotiations to cover Iran's nuclear and ballistic missile program, in contrast to Bolton and Secretary of State Mike Pompeo, who have pushed instead for more comprehensive negotiations regarding Iran's regional activities. Iranian Supreme Leader Ayatollah Ali Khamenei has indicated in the past that Iran is willing to place a cap on ballistic missiles whose range exceeds 2,000 kilometers (1,250 miles). Various leaks also suggest that Rouhani's team has defined specific terms for potential talks, including a mechanism to export at least 750,000 bpd (compared to earlier demands of at least 1.5 million bpd), accelerate the JCPOA timeline for Iran to sign the Additional Protocol to assuage nuclear proliferation concerns and, more symbolically, ensure Khamenei issues a fatwa against nuclear weapons as an additional confidence-building motion.

With both sides appearing to add some definition to their negotiating terms, the White House has remained dogged in its determination to schedule a meeting with Rouhani. According to a recent New Yorker article by Robin Wright, citing European and French diplomats, the Trump administration attempted to set up a meeting between the leaders at least eight times (including two times on the sidelines of the U.N. General Assembly) during the first half of Trump's term. Iran, however, repeatedly rebuffed the requests, countering with a simple and predictable ultimatum: Suspend the sanctions, and then we can talk. As Rouhani recently expressed, Iran is not interested in giving Trump a photo-op to claim a hollow foreign policy victory à la North Korea (if that's what the American president is after, "it's possible to do it with Photoshop," Rouhani said). Iran knows it is facing another difficult negotiation ahead no matter who wins the 2020 U.S. presidential election. As a result, Iran is not about to embark upon comprehensive negotiations with a hard-line and mercurial White House to draft JCPOA 2.0, but it is willing to get the conversation started if it helps ease some sanctions.