Trump Is Wrong: Immigrants Aren't Coming To Take Your Jobs After Coronavirus 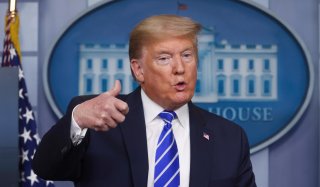 President Trump recently said that there were two reasons for virtually halting all immigration to the United States in response to COVID-19. The first was to prevent the spread of the disease domestically. The second was to save American jobs for American citizens. We’ve already analyzed the first claim, this post will look at whether reducing immigration further will help save jobs for Americans. The answer is no.

Unemployment is spiking during the COVID-19 crisis. Americans are reacting to the virus by changing their economic behavior by working at home where possible, spending less time in dense public places, and in numerous other ways that result in less economic activity – sometimes voluntarily and sometimes in response to government shelter in place orders. As a result, employment is falling. In this situation, many pundits are arguing that further restricting immigration will preserve jobs for American citizens. Further restrictions will have no such impact. I’ve written much about the economic effects of immigration before, but here are some big takeaway points related to the recent immigration ban:

First, immigrants come to the United States primarily because of economic opportunity. Even those coming today on green cards intended for family‐​reunification are primarily coming to reunite with family members who, at one point in the chain, came for economic reasons. If the benefits of coming to the United States are greater than the costs (psychological costs, cost of moving, opportunity cost, danger of migrating, etc.), then many people will do so.

The biggest benefit of coming to the United States is higher wages, which are higher here because immigrant workers have a greater marginal value product (MVP=the number of goods produced by a worker multiplied by the market price for those goods). That means that immigrants are more productive here than in their home countries, so they supply more goods and services that are sold at higher prices. The amazing thing about demand for labor is that it is entirely determined by the worker’s MVP.

Economists Michael Clemens, Claudio Montenegro, and Lant Pritchett estimate the place premium, which is the estimated wage benefit of moving to the United States adjusting for the cost of living through a measurement called purchasing power parity (PPP). For example, they estimate that a working age Mexican male with 9–12 years of education who was educated in his home country can expect a 2.6-fold increase in his wages. That’s an enormous gain.

Immigration slows during a recession because the number of jobs decreases and, oftentimes, wages also adjust or their growth slows. Thus, the big benefit of immigrating to the United States evaporates for many immigrants during a recession. Immigration falls during recessions because immigrants benefit less from coming here, but natives benefit less too so the government also typically responds by increasing immigration enforcement. Less commonly, the government restricts legal immigration like President Herbert Hoover did in 1929 at the beginning of the Great Depression. The flow of illegal immigrants into the United States changes most dramatically during a recession as they’re the most economically sensitive immigrants.

In response to COVID-19, the U.S. economy is in recession and unemployment is skyrocketing so the benefits of immigrating here are falling. Unlike other recessions, COVID-19 is also increasing the costs of immigrating. The virus is very widespread in the United States and many immigrants might be hesitant to risk their health to come here. Thus, the economic benefits of coming here are down due to the recession and the costs of doing so are up because of the virus. Immigration should fall on its own without changes in government policy.

Second, the impulse to close immigration to protect jobs for American citizens is known as the lump of labor fallacy, which is a fundamental misconception that there is a fixed amount of work in a society. Believers in this fallacy apply it to immigration by arguing that any job held by an immigrant could be held by an American citizen, but this just simply isn’t true. The number of jobs available depend on myriad economic factors and is never stable.

The so‐​called displacement effect, which is the term for when immigrant workers push native‐​born American workers out of the labor market, is rarely ever even observed in practice and always very small when it is detected. Most economic research on the effects of immigration on employment find no statistically significant evidence that immigrants push natives out of jobs, even in extreme cases like the Mariel boatlift that increased Miami’s labor force by 7 percent in 42 days. Immigrants and natives typically move to the same economically growing areas of the country, which we wouldn’t see if immigrants were taking American’s jobs.

Third, immigration doesn’t much affect the wages of native‐​born Americans in the long run. Initially, more immigration might slightly lower wages. However, that decline in wages raises the relative price of capital, which are the tools that workers use to produce goods and services. As a result, the profits from capital increase and investors respond by producing more capital, which causes its price to fall. A consequence of more capital is that workers become more productive, which results in higher wages for them. The labor demand curve is almost perfectly elastic in the long‐​run. This economic effect, however, doesn’t affect all workers equally.

As the National Academy of Sciences noted: “When measured over a period of 10 years or more, the impact of immigration on the wages of native‐​born workers overall is very small. To the extent that negative impacts occur, they are most likely to be found for prior immigrants or native‐​born workers who have not completed high school—who are often the closest substitutes for immigrant workers with low skills.”

Massive cuts in legal immigration don’t raise wages either. The best research on this is by economists Michael Clemens, Ethan Lewis, and Hannah Postel who study the effectiveness of the U.S. government’s 1964 termination of the Bracero program. That temporary farm worker program was cancelled to raise the wages of American farm workers by reducing the total size of the workforce. They found that ending lower‐​skilled migration for farm workers had little measurable effect on the labor market for Americans who worked in those occupations. Farmers didn’t respond to the cancellation of Bracero by raising wages, but by using machines to harvest crops and altered the crops they planted to take account of the new dearth of workers. Instead of planting crops that required labor‐​intensive harvesting or care, they planted other crops that required many fewer workers. Farmers turned to machines like tomato pickers and changed methods for planting and harvesting other crops to take account of the newer wages they would have faced had they stuck with the Bracero‐​era farm techniques. Those new methods were more expensive, but cheaper than raising wages.

Fewer immigrants would come here anyway because there is less economic opportunity and more danger due to the virus. Those that come do not displace native‐​born American workers. Lastly, those who come slightly raise the wages of native‐​born American workers. Trump’s “temporary ban” on legal immigration, like most of his previous temporary bans, will probably last longer than is necessary or won’t be cancelled at all until there’s a drastic change in the political situation. Regardless of that, protecting American jobs is not a good reason to close the borders.

This article by Alex Nowrasteh first appeared in CATO on April 4, 2020.