Trump's Benghazi? That's What Liberals Are Saying About Baghdad 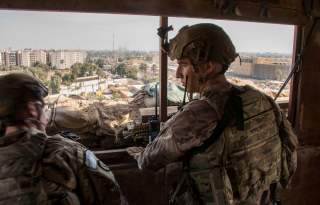 Liberal pundits slammed President Donald Trump’s handling of protests at the U.S. embassy in Iraq and suggested it will consume his presidency in the same way the Benghazi scandal did the Obama administration.

MSNBC pundit Joy Reid and Democratic Sen. Chris Murphy of Connecticut were among a handful of people who suggested the protest is a result of the president’s lack of leadership. A progressive military veteran group also taunted the president over the protests.

“The attack on our embassy in Baghdad is horrifying but predictable,” Murphy wrote on Twitter Tuesday, referring to the reports showing that protesters stormed the embassy in Baghdad, Iraq. Reports show that roughly 100 U.S. Marines were sent to Iraq to help with security.

Protesters managed to break through the main gate amid demonstrations against U.S. airstrikes on an Iran-backed militia group in the country.

“Trump has rendered America impotent in the Middle East. No one fears us, no one listens to us,” said Murphy, a Democrat and fierce critic of Trump. He believes that the president consistently undermines his own administration’s advice on foreign policy matters.

The attack on our embassy in Baghdad is horrifying but predictable.

Trump has rendered America impotent in the Middle East. No one fears us, no one listens to us.

America has been reduced to huddling in safe rooms, hoping the bad guys will go away.

Reid made a similar comment on Twitter Tuesday, retweeting a White House message that addressed the protests and told her followers: “As Trump’s Benghazi unfolds in Iraq…” Trump has had a few verbal tiff with Reid in the past. He said on Twitter in September that she has “no talent.”

VoteVets, a veterans group that works to elect Democrats, also leaped into the fray, with the group warning Trump on Twitter that he was about to have his own Benghazi “unfortunately in Iraq.” The group touts the fact that the president blocked their account.

The coordinated terrorist attack on the facility in Benghazi, Libya in 2012 culminated in the deaths of Ambassador Christopher Stevens and U.S. government personnel Sean Smith, Tyrone Woods and Glen Doherty. Unlike Benghazi, no deaths have been reported so far in the Tuesday protests at the U.S. embassy in Baghdad, Iraq.