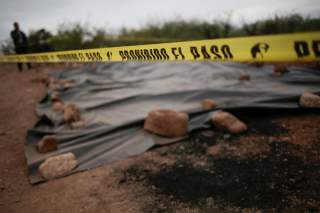 The slaughter of an American family (including four children) traveling on a road in northwest Mexico has sparked outrage in both countries. Authorities believe that the attack likely was a case of mistaken identity, with gunmen from one drug cartel believing that the vehicle contained the family of someone from a rival cartel. President Trump reacted to the incident with a tweet that “this is the time for Mexico, with the help of the United States, to wage WAR (sic) on the drug cartels and wipe them off the face of the earth. We merely await a call from your great new president!” He added: "If Mexico needs or requests help in cleaning out these monsters, the United States stands ready, willing & able to get involved and do the job quickly and effectively."

Trump’s suggestion is a monumentally bad idea. President Andres Manuel Lopez Obrador thanked him for the offer of military assistance, but he quickly rejected it. That was a wise move. One has to wonder what President Trump thinks the United States and Mexico have been doing for the past several decades. Richard Nixon declared a “war” on illegal drugs in 1971, and Washington has pursued that strategy both domestically and internationally ever since, with Mexico being a crucial theater. Washington pressed Mexican President Felipe Calderon to escalate the campaign in his country from 2006-2012, using the military as a major player, and the result was a catastrophic surge in violence.

A second, even larger, surge is taking place today. As I discuss in a recent article in the American Conservative, drug war fatalities were more than 33,000 in 2018 and are on a comparable pace for 2019. The numbers are substantially higher than they were even during the bloody Calderon years. The extent of how much power the cartels can now exercise became clear in late October when Sinaloa cartel gunmen defeated the Mexican National Guard in a series of pitched battles through the streets of Culiacan, the capital of Sinaloa state. Cartel forces gained effective control of downtown Culiacan and forced Mexican authorities to release two sons of former cartel leader Joaquin “El Chapo” Guzman. That was no small victory. Culiacan’s population is more than 800,000, larger than such U.S. state capitals as Sacramento and Denver.

Nevertheless, it would be an especially bad step for the United States to send its military forces to Mexico—even in very limited numbers—to “assist” the Obrador government confront the cartels. Washington’s history with its southern neighbor has not been a happy one. Not only did the United States detach and annex the northern half of Mexico in the 1846-1848 Mexican War, but during Woodrow Wilson’s administration, U.S. forces occupied Vera Cruz. An uninvited U.S. military expeditionary force also operated in northern Mexico, pursuing rebel leader Pancho Villa. Such overbearing behavior by the “Colossus of the North” is still a sensitive matter among many Mexicans. Moreover, the last thing the United States needs to do is become bogged down in another endless, unwinnable war.

Trump and other drug warriors refuse to face the reality that as long as the United States retains a policy of drug prohibition, violence in Mexico likely will get worse, not better. Americans spend an estimated $146 billion annually on currently illegal drugs, according to a recent RAND Corporation study, and Mexico is an especially important supplier. Rival cartels vie with each other to control the lucrative trafficking routes into the United States, using any means necessary.

Governments are not able to dictate whether people use mind-altering substances. Such vices have been part of human culture throughout history. Governments can determine only whether reputable businesses or violent criminal gangs are the suppliers. A prohibition strategy guarantees that it will be the latter—with all the accompanying violence and corruption. The bloody struggles in Mexico are merely the latest confirmation of that reality.

This article by Ted Galen Carpenter originally appeared at the Cato Institute.