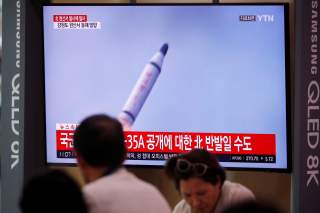 In a little less than a month, North Korea conducted seven sets of ballistic missile and rocket tests that advanced its capabilities. More recently, it coupled its announcement that it is prepared to resume talks with the United States with the second test of its super-large multiple rocket launcher These tests have been met with seeming indifference from US President Donald Trump despite their implications for regional security. Trump isn’t the only one to downplay North Korea’s tests. Experts have suggested that the tests are designed to increase North Korea’s leverage in the expected resumption of talks with the United States or express its unhappiness with the US-South Korea military exercises.

It’s also unlikely that the tests will provide North Korea with any leverage in talks with the United States. Trump has clearly indicated that the tests are not a concern and Secretary of State Mike Pompeo has suggested that they do not violate UN Security Council Resolutions prohibiting ballistic missile tests by North Korea. By publically downplaying them on multiple occasions Trump and Pompeo have lessened any negotiating value the tests might provide. The stalemate the two sides have faced for nearly two decades also suggests that tactical actions have had little impact on the broad course of negotiations.

North Korea most likely used the joint US-South Korea exercises as an excuse to test new weapons systems and allow it to claim that they are merely a sign of its displeasure and a response to the “aggressive nature” of the United States and South Korea. The most recent test may be different given North Korea’s suggestion that it is finally willing to return to talks, but was still used as an opportunity to test a new system rather than merely raise the temperature on talks.

Trump has presumably downplayed the tests to keep the nuclear talks on track. But with the talks seemingly stalled and North Korea suggesting their prospects may be dwindling, downplaying North Korea’s tests seems to have done little to keep talks alive. Especially, since North Korea has previously demonstrated that a willingness to resume talks does not always translate into actual talks. Though, it did send a clear signal to Kim Jong Un that there would be no consequences for the continued development of a range of missile systems.

At the recent G7 meeting, Trump said “I’m not happy about it.  But, again, he’s not in violation of an agreement,” suggesting that these tests are normal and legitimate. However, the United Nations has expressly forbidden North Korea to conduct ballistic missile tests. Since 2006, the UN has called on North Korea to suspend all activities related to its ballistic missile program, and since 2013, to abandon its ballistic missile program. There is no exception for short-range tests. Similar language has been included in all of the UN Security Council Resolutions since Trump came to office.

Despite Trump’s public stance, the tests have security implications for the United States, South Korea, and Japan. In July and August, North Korea tested systems that are more mobile, increasingly difficult to target, and more difficult to intercept. These new systems would allow it to place a wider range of US assets in South Korea and Japan within striking distance, while making it more difficult to target North Korea’s systems.  That the tests have included new weapons systems and extended beyond the end of the joint US-South Korea military exercises suggests the tests were more for the modernization of North Korea’s weapons technology than any other purpose.

Among the most concerning issues is Pyongyang’s follow up test of the KN-23 missile in late July. The KN-23 is believed to be able to follow an irregular flight path, potentially allowing it to travel in a gap between US missile defense systems. Japanese Defense Minister Iwaya Takeshi also noted the irregular flight paths of the tests, which would also make them more difficult for missile defense systems to intercept.

By failing to criticize North Korea for conducting short-range missile tests, Trump is normalizing the tests. Even North Korea suggested that Trump’s remarks justify its own missile tests. Kwon Jong Gun of North Korea’s Ministry of Foreign Affairs said as much in saying that “Even the U.S. president made a remark which in effect recognizes the self-defensive rights of a sovereign state, saying that it is a small missile test which a lot of countries do.”

Whether intentionally or not, by normalizing North Korea’s recent ballistic missile tests, Trump is making it more rather than less likely that any deal with North Korea will leave Pyongyang with increasingly advanced missiles capable of attacking Japan, South Korea, and US military installations in the Pacific.

With talks now possibly set to resume and North Korea stating that the talks should consist “of the issues we have so far taken up,” it seems unlikely that the United States would be able to successfully add North Korea’s short-range ballistic missiles to the agenda for the talks unless the two sides have already privately discussed them – something Trump’s comments suggest is likely not the case.

Troy Stangarone ([email protected]) is the senior director and a fellow at the Korea Economic Institute. The views expressed here are the author’s alone.

This article first appeared at PacForum.