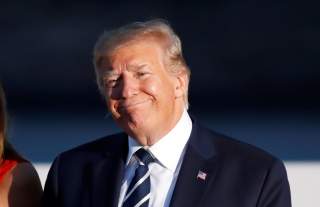 And this is what I love about this, it was made in Michigan, so the auto manufacturer, the union members made money. It was transported to Florida. So the truck driver made money, the auto dealership made money. The salesperson got his commission for selling the car and the insurance company salesperson made money.

All this money stayed in the United States to help stimulate the economy and he feels gratified and happy that he’s providing for his family. That was one example.

Another one, Linda went out and bought a home with her raise. That extra $290 a month, $300 a month that she received was the difference that she needed to be able to buy a home.

Now you have somebody buying a home. The supplies were harvested and created in the United States, the laborers from the United States. And Linda gets to live in this brand new home built in her town and all because of the Republican President Trump tax cut. An amazing thing and it’s affecting so many people’s lives.

And then look at the 16 people that I just hired in this new company and the other three that I’m going to be hiring in the other firm and 10 that we added for the pancake syrup company with a new factory, by the way. So 50,000 plus 50 to 100,000 square feet. So this is all new things, all new investments made in our country. It’s amazing.

del Guidice: So you had mentioned overall expanding production. You just mentioned now the new factory, adding people to the syrup company that you all have. What has that meant? Are you not only adding new people, are you also making new kinds of cookies? … What has that looked like for you guys?

Semprevivo: We were able to really focus our energy on our pancake syrup company because the freed up capital, that extra money, we really put to marketing our sugar-free pancake syrup. … That extra marketing over the last couple of years, … or since 2018, that enabled us to grow the sales. And I’m talking 30% growth rate since this tax cut has come into effect. And we’re going to probably end this year at a 32% to 35% growth for our sugar-free pancake syrup.

So we decided to invest more money into the pancake syrup company and grow that. We have sugar-free pancake syrup, peanut butter, and coffee. So we’re putting our energy into that and that’s where the new factory is and that new factory is in Florida. So we’re really excited about that project and it was all because of the tax cuts.

del Guidice: … Speaker Nancy Pelosi and some other Democrat leaders dismiss tax relief as insignificant, with Pelosi ridiculing what Americans got as “crumbs.” And as someone who has been directly impacted by these “crumbs,” how would you respond to her assessment of tax reform?

Semprevivo: It just shows us how out of touch Nancy Pelosi is and the Democratic Party is with the hardworking, middle-class Americans. I mean, I’ve been there. I watched my parents skip meals. I’ve seen what it was like, the struggle, not to have enough money for medication and then just belittling, “Oh, it’s only $3,000 a year or $1,800 a year. People get to put in their extra back into their pocket.”

Well, that $1,800 … or $3,000 is a difference between paying your electric bill one month and not or being able to buy groceries for your children. It makes a big difference in people’s lives. Buying cars, being able to buy a home, your first home at the age of 68 years old. I mean, these are huge things.

Nancy Pelosi and the Democratic Party [are] way out of touch. They cannot relate to the everyday person. They say they can, but these types of comments about, “They’re just crumbs,” just shows you that the proof is in the pudding, that they really don’t know what it’s like to struggle and be an average everyday American. And I’m ashamed. I’m ashamed of that comment.

del Guidice: Some liberal politicians, this is also very surprising given the success you’re talking about, it doesn’t seem like they appear to recognize it, but they’ve suggested that they would—if given a chance—repeal some or all of Trump’s tax cuts. How would that affect your business if that ever happened?

Semprevivo: Well, what would definitely happen is the raises would have to be removed and people would have to lose their jobs, factually speaking, because we would have to start taking the money from the economy and holding it back into the bank account.

So from a budgetary standpoint, we’re going to be losing all those funds, which are all these jobs that have been created would be reversed. And that’s just not true for my company. This is across the board.

I’m seeing expansion at businesses all across the United States, small business owners that I know and they would have to do the same thing. They’d have to lay off people. They’d have to close buildings. …

I’m hiring 50 people in my real estate company. I have 16 now. I’m hiring 50, opening up multiple locations, and I would cease expansion altogether and I’d have to look at alternative ways to save money and that’s going to be even wage cuts and downsizing.

del Guidice: So hypothetically speaking, looking back, had tax reform not happened, had Republicans not lead on that, what would the outlook of your business as well as your employees’ lives look like today? I know you mentioned the story of Mike and him being able to buy a car for his wife so that she’d be able to have a dependable vehicle to drive around while he was at work. What would it have looked like had tax reform not happened?

Semprevivo: Well, that’s a fantastic question. We experienced eight years, prior to President Trump, eight years of uncertainty between regulation and taxes. And we were really frightened. I mean, we tightened the purse strings, our sales, their growth rate was not the same as it was pre-Obama. And our growth rate now is parabolic. It’s like a rocket when 30% to 33% will end up year end. Thirty percent last year. I mean, the growth is just phenomenal.

I’ll tell you, those eight years, I saw enough. We had to really hold back and draw close our purse strings.

And if we didn’t have these tax cuts, I don’t really know if we would be in business today. And I’m very serious when I say that because we were scrimping and saving at every corner because [of] the uncertainty.

So they’re increasing their orders across the board. Everybody, every one of our customer sales are up in our company. And we talked about it on the phone. I still talk to a lot of my distributors on the phone and it’s always the same message.

Semprevivo: Yes. The tax cuts 2.0 is absolutely for small businesses in general. I’d say flatten the tax brackets, make it as simple as possible to file taxes.

I’m not talking about a flat tax as in one tax for all that rate. I’m just saying flattening out the bracket and making it simple for a small business owner to file their taxes where you can almost do it on just one sheet of paper and that would just really make it fantastic for small business owners.