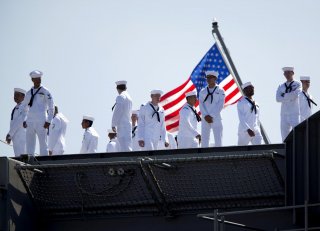 Back on Feb. 15, when the Department of Defense released its budget request , the world and the United States looked a lot different. The NBA was coming out of its All-Star game, college basketball was gearing up for March Madness, and offices and highways were packed. The World Health Organization would not declare coronavirus to be a pandemic for another month .

The COVID-19 pandemic now affects every aspect of Pentagon operations, and with the cancellation of the scheduled congressional markup for the 2021 defense budget , it likely will slow significantly its progress through the system.

The recent stimulus package included more than $10 billion for the Pentagon, $3.8 billion of it dedicated to the Defense Health Program, and another substantial part dedicated to operations and maintenance for pandemic-related activities, such as deploying medical ships to New York City and Los Angeles .

But with the start of the next fiscal year just six months away now, it is paramount to understand the Pentagon’s initial budget request and assess its implications.

The request released in February emphasizes current readiness and the development of future capabilities over increasing contemporary military assets across all the military departments, according to a new paper from The Heritage Foundation.

The Department of Defense sought $740.5 billion, which represents a $2.5 billion increase over 2020. After four years of substantially increased budgets, the Pentagon was forced to settle for top priorities only and even then had to find ways to free up $5 billion within the department to be reinvested in higher priorities.

For the overall budget request , the research and development portion increased by 2% to $106.5 billion. Most of the increase went to classified programs, which suggests the Pentagon is emphasizing the development of future capabilities, some quite far from being deployable military assets. The department requested $163.5 billion for personnel costs, an increase of 5.7% that reflected pay raises, since the department requested little to no growth in troop numbers.

To make up for those increases, the budget request for procurement decreased by 4.8% to $136.9 billion. This means the Pentagon is asking to purchase less of the currently fielded military capabilities, such as the F-35, the Joint Light Tactical Vehicle, and submarines.

The major theme for the 2021 defense budget request is trading increased capacity in the near term for maintaining high levels of readiness in the present and investing in research programs for the future across all the services.

Congress now must assess if the trades between short-term and long-term capacity best prepare the country for great power competition , which requires investment in many areas that go beyond defense. But the Pentagon will play a big role in responding to the challenges posed by Russia and China and will require timely budgets .

To move the defense budget forward, Congress must overcome its regular budgetary inertia and the time lost to coronavirus closures and delays. It will be a challenging budget year, but it all starts with fully understanding the choices the Pentagon has suggested are necessary.

This article by Frederico Bartels first appeared in The Daily Signal on April 4, 2020.