Trump's New Trade Deal: the Good, the Bad, and the Ugly 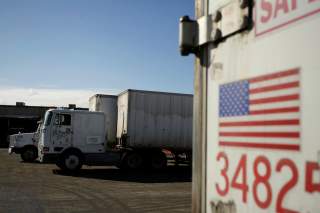 Yesterday's biggest trade news was that the House Democratic leadership reached a deal with the Trump administration on changes to the U.S.-Mexico-Canada Agreement (USMCA), which was signed by Canada, Mexico and the United States last year. The agreement was an effort to renegotiate the North American Free Trade Agreement (NAFTA). Reception of the new deal was mixed, and after taking leadership of the House in January of this year, Democrats wanted to leave their own imprint on the new trade agreement.

In light of yesterday’s announcement and today’s release of the Protocol of Amendment by the Office of the U.S. Trade Representative, we repeat our analysis from October 2018 in this blog post, with updates to take into account the recent changes. This is by no means a comprehensive analysis, since there is a lot in the 2000-page document that makes up the USMCA, as modern trade agreements go well beyond traditional trade issues. Some of what is in there is good and some of it is bad (with many of the non-trade issues, there is likely to be disagreement as to which provision falls into which category).

In this blog post, we offer our thoughts on some of the key provisions, after which we provide an initial overall assessment of the agreement. For each item, we indicate in a parenthetical whether there have been changes from the USMCA signed last year to the amendments released today. We break it down into the good, the interesting, the whatever, the worrying, the bad, and the ugly.

Canadian agriculture (no changes): In terms of liberalization in the USMCA, the most important component is the liberalization of Canadian agriculture imports, such as dairy products, eggs, wheat, poultry, and wine. Dairy market access was a key concern for the United States, which has long complained about Canada’s strict supply management and quota system. The Office of the United States Trade Representative (USTR) has noted the opening of Canada’s dairy market as a key achievement, because it gives the U.S. additional access to what was agreed in the Trans Pacific Partnership Agreement (TPP). In addition, Canada agreed to give up a pricing system for certain types of milk, as well as expanding the U.S. quota for chicken, eggs, and turkey. On wine, the U.S. and Canada agreed in a side letter that the Canadian province of British Columbia (BC) would adjust its measures restricting the sale on non-BC wine in its grocery stores. The United States agreed to give BC until November 2019 to make this adjustment, before advancing a complaint it already put forward at the World Trade Organization (WTO) on this issue. As of July 2019, BC has allowed for imported wine to be sold in grocery stores. Canadian agriculture liberalization is the most positive part of the new agreement, as it gives U.S. producers greater access to the Canadian market, and will be good for consumers in Canada.

de minimis: The de minimis threshold for products that you buy online and can be imported duty free has been raised for Canada and Mexico. Since 2016, the United States allows people to purchase goods up to $800 duty free, and has been pushing for Canada and Mexico to raise their limits as well. It did not persuade them to do so in the TPP. In the USMCA, however, Canada raised its de minimis threshold to CAD $150—a significant increase from the previous CAD $20 limit. In addition, sales tax cannot be collected until the value of the product reaches at least CAD $40. This is good for Canadian consumers and small businesses making online purchases. Additionally, a 2016 study showed that increasing the duty free limit would be cost-saving for Canada. Mexico also increased its de minimis level, from USD $50 to USD $100, with tax free de minimis on USD $50. USTR has noted that this will be especially helpful for small businesses.

There was, however, a concerning footnote in Article 7.8 that would allow the United States to lower its de minimis threshold to a reciprocal level of another party’s if that party’s de minimis is lower. This just means that the United States could potentially reduce its de minimis threshold to that of Canada or Mexico’s. This effort received bipartisan pushback, and reports suggest that in the final implementing bill, the footnote will be removed (though this is not specified in today’s amendments). This would be a positive development for preserving Congress’ role in regulating commerce.

State-to-state dispute settlement: In order to ensure that the obligations that have been agreed to in a trade agreement are followed, there needs to be an enforcement mechanism. Chapters 11, 19, and 20 of the original NAFTA are often bundled together as “dispute settlement” chapters, but they all do different things. Chapter 20 is the basic provision that allows one government to complain that another government is not complying with its obligations. The original NAFTA Chapter 20 did not work very well, and unfortunately the original USMCA failed to fix its flaws. With the 2019 update, though, it looks like most of these problems have been fixed. A roster of panelists will now by established by the date of entry into force of the agreement, and the formation of a panel can no longer be blocked. While we still have some questions regarding certain language, overall, this is a substantial improvement.

Regulatory cooperation (no change): One notable addition to USMCA was an expansive chapter on Good Regulatory Practices, which builds upon the TPP Regulatory Coherence chapter, the Canada-EU Comprehensive and Economic Trade Agreement (CETA), and bilateral initiatives that have been in place between the U.S. and Canada, as well as with Mexico, since 2011. The key items in this chapter are provisions on increasing transparency in the regulatory process, providing a clear rationale for new regulatory actions, as well as encouraging cooperation on minimizing divergence in regulatory outcomes. The general idea is to make regulations less burdensome on trade. It will be interesting to see how this chapter functions in practice, but it appears to be the most comprehensive attempt to address this issue in any trade agreement the United States has signed.

Digital trade (no change): The digital trade provisions are very similar to what was in the TPP. In theory, these provisions can help facilitate e-commerce (the U.S. International Trade Commission says they will provide "certainty," but we are skeptical). They are still untested and it is not clear what impact they will have. There were rumors that Democrats would push to remove language in the USMCA borrowed from Section 230 of the Communications Decency Act, which removes liability for third-party content hosted on online platforms, in addition to providing flexibility for these platforms to exercise a good-faith effort to moderate this content. However, after the amendment, this language remains in place, and the tech industry appears pleased with this status quo.

Chapter 19 (no change): The special review mechanism for anti-dumping/countervailing duties in the famous Chapter 19 has been shifted to Chapter 10, but remains essentially the same. This provision does not have much, if any, commercial impact, but Canada insisted on keeping it nonetheless, and was able to push back on U.S. demands to eliminate it.

Currency (no change): This is the first trade agreement with binding provisions related to exchange rates, although not all of this chapter's provisions are enforceable. There are few concerns with Canada's and Mexico's practices in this area, so this provision is really just a marker to lay down for future agreements. The test of this provision will be if another country for which such concerns have been raised (e.g., Japan) agrees to it. While there may be real issues with currency intervention here and there, the problems here have been exaggerated, and have been used by politicians as an excuse to impose tariffs.

IP provisions: The intellectual property chapter strengthened IP protections, going beyond what was agreed to in the TPP. For example, in the original USMCA, the parties agreed to 10 years of data exclusivity for biologic drugs (up from 5 to 8 in the TPP), copyright protection to a minimum of the life of the author plus 70 years, and 75 years for copyrights not based on the life of a person. As part of the 2019 update, the provisions that established a 10-year market exclusivity period for biologic drugs were deleted, and certain other provisions were modified or removed as well.

Section 232 auto tariffs (no change): As part of the NAFTA renegotiations, Canada and Mexico had hoped to secure an exemption from the potential imposition of additional Section 232 tariffs on autos. However, instead of an outright exemption, there are two separate side letters to the USMCA for Canada and Mexico that exempt a set quota of passenger vehicle imports and auto parts, as well as all light truck imports, from 232 tariffs that may be imposed in the future. The United States also agreed not to impose 232 tariffs on Canada or Mexico for at least 60 days after the measure is imposed, allowing the U.S. to negotiate separate agreements within that timeframe. The exemption levels are high enough that all auto exports from Canada and Mexico could be exempt, which is good news.