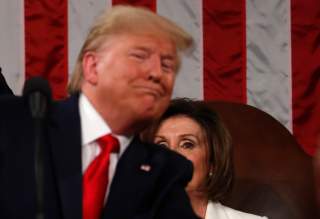 We do not need to “just do something.” We need to do the right thing. And the right thing is to ensure that the American people are never deprived of their greatest check against the tyrannical impulses of government.

The right thing is to disarm dangerous criminals without inhibiting the ability of law-abiding Americans to protect their lives and livelihoods.

The right thing is to defend the Second Amendment just as ardently as we defend the rest of the Bill of Rights.

The State of the Union contained a brief mention of infrastructure. Unfortunately, the president used this time to promote a further expansion of federal activity.

The Senate infrastructure bill is badly flawed, increasing spending and creating questionable new programs despite the Highway Trust Fund’s chronic deficits. The federal role should be heavily devolved to states and the private sector.

While nationwide high-speed internet would be a wonderful thing, this should not be accomplished through billions of dollars in federal subsidies, as seen in the proposal recently introduced by House Democrats. The administration should continue its focus on deregulation to ensure that private investments such as infrastructure expansion are as easy as possible.

President Donald Trump criticized the over 130 members of Congress who “endorsed legislation that would bankrupt our nation by providing free taxpayer-funded health care to millions of illegal aliens, forcing taxpayers to subsidize free care for anyone in the world who unlawfully crosses our borders.”

Trump said this “would raid the Medicare benefits our seniors depend on, while acting as a powerful lure for illegal immigration.” He is right about that. Providing government benefits to aliens who are in this country illegally is financially foolish and will in the long run make the illegal immigration problem even worse.

Trump also engaged Congress on the issue of sanctuary jurisdictions. This is the reckless policy of cities and states obstructing federal immigration enforcement and releasing dangerous criminal illegal aliens who’ve been arrested for local crimes back into local communities to “prey upon the public,” as Trump said, rather than turning them over to federal authorities so they can be removed from the country.

This has resulted in literally hundreds of thousands of crimes that could have been prevented and the victimization of countless Americans.

Trump described some of those victims, including Rocky Jones, who was murdered by an illegal alien with prior convictions for robbery and assault. The alien was released by California authorities under that state’s sanctuary policy rather than turned over to federal authorities.

The president voiced his support for a bill that would allow victims and their families like Jones’ wife to sue sanctuary jurisdictions (Jones’ brother was in the Senate Gallery). As the president told members of Congress and the public, “The United States of America should be a sanctuary for law-abiding Americans—not criminal aliens.”

Trump talked about the wall being built along the southern border, his ending the catch-and-release policy of prior administrations, and the new agreements he has negotiated with several countries, including Mexico and El Salvador. He can rightly claim credit for those (and other) policies, having reduced illegal border crossings 75% since May.

And the president promoted his new approach to legal immigration by replacing “our outdated and randomized immigration system with one based on merit.”

That is a serious proposal that should be considered by Congress. As the president said, “We should welcome those who follow the rules, contribute to our economy, and uphold our values.” The vast majority of Americans agree.