Trump's Tarrifs Are Hurting the Economy. Here's How to Get Rid of Them For Good. 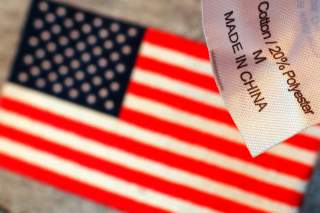 What if the president could define what constitutes a national security threat and enact policy concurrent with that determination? And what if, because of that, he were allowed to levy indirect taxes on the America people from his seat in the Oval Office? By way of the Cold War-era Section 232 of the 1962 Trade Expansion Act, both of those realities exist.

Under Section 232, any U.S. head or agency has the authority to initiate investigations of imports as they relate to national security threats. It’s a process that can be entirely self-initiated by the executive branch. But currently, there’s no working definition of what a national security threat is, and that the determination is made by the Department of Commerce, which has allowed for far too much executive power bloat in matters of trade policy.

For his part, President Donald Trump has certainly taken advantage of this ambiguity—most recently with his ill-advised steel and aluminum tariffs. If lawmakers want to enforce both constitutional uses of power and consumer-friendly policy, they should reduce the scope of this legislation by supporting restorative legislation as seen through a recently-proposed by Sen. Patrick Toomey.

How does this section facilitate executive overreach? Vague guidelines. The Section 232 provisions don’t specify what constitutes a national security threat, only that the investigation must consider:

“. . . certain factors, such as: domestic production needed for projected national defense requirements; domestic capacity; the availability of human resources and supplies essential to the national defense; and potential unemployment, loss of skills or investment, or decline in government revenues resulting from displacement of any domestic products by excessive imports.”

Allowing nearly anyone in the executive branch to interpret and investigate imports for national security reasons is an outrageous provision. Just look at some of the real-world implications this power has had in just the last year.

When President Trump wasn’t getting a favorable trade deal with China, he claimed the situation constituted a threat to national security and enacted aluminum and steel tariffs. The president and many of his supporters said the tariffs were necessary to secure provisions needed to keep the military properly functioning.

None of this is actually true.

The United States is the fourth-largest steel producer in the world—turning out roughly 80 million tons of steel a year. But the U.S. military consumes less than 3 million tons of steel a year, so the amount of steel we produced yearly is nearly twenty-seven times the amount of steel our military needs. In a word, there’s no national security threat and Trump was blowing things out of proportion to get what he was after. With its domestic production alone, America could supply twenty-seven defense departments with its domestic production alone.

But Section 232 says he can—without consequences.

When it’s up to the discretion of the president to take action as he sees fit, the sorely-needed legislative process is rendered moot. Meanwhile, this president’s unchecked penchant for tariffs is negatively impacting the six million-plus folks with jobs in steel-consuming industries through price increases.

The problem can be fixed, of course. Right now, there are two proposed bills to address this problem from GOP Sens. Patrick Toomey (PA) and Rob Portman (OH). However, only Toomey’s bill will accomplish anything meaningful.

While Portman’s bill, dubbed the Trade Security Act, would merely reaffirm already-held Congressional power and create exemptions for Trump’s previous executive actions, Toomey’s bill is more restrictive and aims to actually limit the president’s power. He wants Congressional approval to absolutely be required to institute the tariffs recommended under Section 232. That is, while the weaker Trade Security Act Portman has put forth allows tariffs to go into effect unless Congress passes a measure to stop them, Senator Toomey’s bill necessitates Congressional approval of all Section 232 tariffs before they can go into effect.

This is a move in the right direction. Toomey’s proposed restrictions bring back the balance of power, disallowing broad executive overreach. Moreover, it shrinks the scope of the provision such that a given president’s interpretation of a national security threat is not the only lens through which the supposed threat is viewed. Toomey’s legislation incorporates a much-needed, stringent definition of “national security” into the statute while setting a requirement that the Department of Defense is to conduct future Section 232 investigations incorporating this definition—a significant improvement on the current Department of Commerce’s case-by-case determinations.

Toomey’s bill provides a real opportunity to reduce the scope of Section 232 and check Trump’s tariff power. If members of Congress want to help American consumers while restoring the balance of power, they should get behind Toomey’s smart policy proposal and put power back where it belongs.