Trump's Tax Cuts: Everything The President Promised Or An Utter Failure? 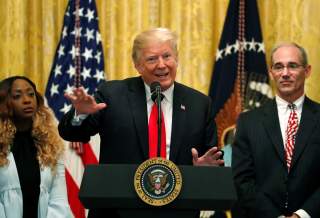 The New York Times is highlighting FedEx as an example of how much of Corporate America “has not made good on its promised investment surge from President Trump’s 2017 tax cuts.” Then the piece goes on: “A New York Times analysis of data compiled by Capital IQ shows no statistically meaningful relationship between the size of the tax cut that companies and industries received and the investments they made.”

So the Trump tax cuts failed? And if so, should we totally undo them and return to the old 35 percent top tax rate and investment expensing rules? All of the top Democratic presidential candidates would probably answer “yes” to the first question, with many also answering “yes” the second. (Other Democrats would raise the corporate to somewhere between 21 percent and 35 percent.)

But caution here is warranted. Do we really know that the tax cut “failed,” over and done? As former Obama White House economist Jason Furman wrote for the recent AEI blog series on the Trump tax cuts:  “Even if we could extract the signal from the noise, it is too early to tell whether the law is living up to its goal of increasing business investment and capital stock over the medium and long run,” while adding that “there is little reason to believe the TCJA substantially boosted investment to date.”

AEI economist Alan Viard puts it this way: “So far, a sharp uptick in investment has not occurred. Is that because the corporate tax cut is not boosting investment? Or because the boost is taking longer than expected? Or has the tax cut boosted investment relative to what it would otherwise have been, even as other factors (perhaps other TCJA provisions or the trade war) have offset the boost?”

It’s important to understand that no matter how politicians and CEOs talked about the tax cuts, economists saw the pro-growth mechanism working in a specific way. The economic goal of the tax cut was to improve after-tax profitability, not create a pool of savings to be invested rather than returned to shareholders. Viard: “Corporations increase their US investments because the corporate tax cut lets them keep more of the profits from those investments, thereby making such investments more lucrative.”

The Tax Foundation’s economic model—considered one of the more rosy models for TCJA-style reforms—projected that the law would increase annual economic growth rates by 0.3% for the first decade (from 1.8% to 2.1%), and raise long-term wages by 1.5%. However, President Trump promised growth rates of 3% (and previously promised as high as 6%), and the President’s Council of Economic Advisers declared that families should expect their household income to quickly begin rising by between $4,000 and $9,000. Allies in Congress asserted that tax reform would produce enough tax revenue growth to pay for themselves. Dismissing the time-tested strategy of under-promising and over-delivering, the White House and its allies created a standard for success that their tax reforms could not possibly meet.