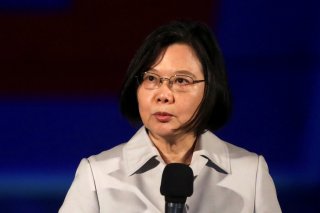 Taiwan has a status that’s unique among countries in the world, in that it’s sort of a country and sort of not. Called the Republic of China, Taiwan is considered by China to be part of China, although it’s prevented from having diplomatic relations with countries that also have relations with China. Taiwan competes in the Olympics, separately from China, but its teams are called “Chinese Taipei.”

Earlier this year, pro-wrestler-turned-actor John Cena issued an apology, in Mandarin and on the Chinese social network Weibo, after he referred to Taiwan as a country in a previous interview. The apology was seen as Cena seeking to mitigate damage that could potentially be done to the Chinese box office performance of his movies.

Of course, there's always the fear that the tension could devolve into a full-on war.

According to CBS News, Taiwan’s leading officials this week “both raised warnings on Tuesday of a hypothetical Chinese invasion of their island.” This came after China flew what was described as “a record number of military planes” into Taiwan’s Air Defense Identification Zone (ADIZ).

"If Taiwan were to fall, the consequences would be catastrophic for regional peace and the democratic alliance system," Taiwanese president Tsai Ing-wen wrote this week in Foreign Affairs, in its November/December 2021 issue. "It would signal that in today's global contest of values, authoritarianism has the upper hand over democracy.”

"Beijing has never abandoned its ambitions toward Taiwan. But after years of double-digit investment in the Chinese military, and expansionist behavior across the Taiwan Strait and in surrounding maritime areas, Beijing is replacing its commitment to a peaceful resolution with an increasingly aggressive posture,” the president added, alleging that China has been carrying out more activity in the Taiwan Strait.

“Taiwan will not bend to pressure, but nor will it turn adventurist, even when it accumulates support from the international community,” Tsai added. “In other words, the maintenance of regional security will remain a significant part of Taiwan’s overall government policy.”

Senior Research Fellows at George Washington University Christine Mc Daniel and Weifeng Zhong argued last month in the National Interest that the United States should “tie the knot” on trade with China.

“At this unique moment, the answer may lie in trade rather than foreign policy. Washington and Taipei have been flirting with the idea of a free trade agreement for two decades. None has yet come to fruition,” McDaniel and Zhong wrote.

“In a new policy brief, we argue that tying the knot on bilateral trade would not only make economic sense but also advance strategic interests for both the United States and Taiwan. The doubts fueled by the chaotic U.S. pullout from Afghanistan make this move more urgent than ever.