Tucker Carlson Is Worried Your iPhone Could Give You Cancer 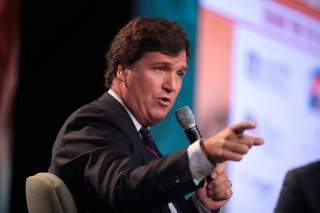 Is your smartphone giving you cancer? The advent of 5G technology has revived old fears about the correlation between high exposure to radiofrequency radiation and cancerous tumors, but experts say that these concerns are overblown.

Earlier this week, Fox News anchor Tucker Carlson ran a segment on the dangers of cell phone radiation. Carlson cited a study by the National Toxicology Program (NTP) that ran from 1999 to 2018, concluding that there is “clear evidence that male rats exposed to high levels of radiofrequency radiation developed cancerous heart tumors.” The NTP announced that they are investigating the potential hazardous effects of 5G technology, which “exposes wireless users to a much broader spectrum of frequencies.”

The segment also cited a recent decision by the Italian Supreme Court to uphold an earlier ruling alleging a link between an Italian business executive’s brain tumor and the heavy use of his smartphone: “There are solid elements to affirm a causal role between the exposure of the person to radio frequencies from mobile phones and the disease that arose,” said the judges.

So, should you worry about the smartphone in your pocket? Not so fast. '

First off, the NTP study was careful to clarify “that the exposure levels and durations in our studies were greater than what people experience.” It should likewise be noted that the FDA “disagreed” with the NTP’s assertion of a clear link between smartphone radiation and cancerous heart tumors in rats, adding that “the totality of the available scientific evidence continues to not support adverse health effects in humans caused by exposures at or under the current radiofrequency energy exposure limits. We believe the existing safety limits for cell phones remain acceptable for protecting the public health.”

Furthermore, the National Cancer Institute aggregated dozens of studies to demonstrate the overwhelming scientific consensus that there is no proven association between radiofrequency exposure from cell phones and brain cancer of any kind. The World Health Association agrees, concluding that  “most of the evidence available does not suggest that there are adverse effects on health attributable to long-term exposure to radio-frequency and microwave radiation from mobile phones.”

As for the science behind this, consider that radiation is simply energy transmitted in waves or particles. There are many different types of radiation, including all visible light, power lines, and AM/FM radios. We are all subjected to nonstop radiation throughout our day, but almost all of it travels at too slow a Frequency (Hz) to penetrate your body and damage your DNA, which can potentially lead to cancerous tumors. This includes cell phones; even 5G radio frequencies, which are up to five times faster than their 4G counterpart, are still much too slow to penetrate the human body.

This type of speculation has proven so long-lived because it plays to an understandably intimate fear: the thing that’s on your body or within a hair’s breadth of you for most of your life is slowly, but surely, killing you. Despite having little to no basis in scientific reality, the smartphone cancer hypothesis is likely here to stay for the foreseeable future.