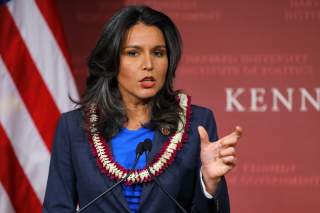 Gabbard got testy while talking to Vossoughian Thursday.

“Every time I come back here on MSNBC, you guys talk to me about these issues. It sounds like these are talking points that Kamala Harris and her campaign are feeding you because she’s refusing to address the questions that were posed to her,” Gabbard told Vossoughian on MSNBC’s “Live with Ali Velshi.”

Gabbard ripped Harris’s record on criminal prosecutions at Wednesday night’s 2020 Democratic presidential debate. Gabbard was the most-searched for candidate for the second time after the debate, according to The Hill, and she is running on a platform of foreign policy.

Vossoughian asked about Gabbard saying that President Donald Trump supports al-Qaeda, and that line of questioning turned to Gabbard’s past meeting with Syrian President Bashar al-Assad.

“One is this president has chosen to double down and triple down on an alliance with Saudi Arabia, a country that is the number one propagator of the radical Wahabi … ideology that fuels terrorist groups like [the Islamic State] and al-Qaeda,” Gabbard said.

“And secondly, this president has doubled down on support for al-Qaeda in continuing this regime-change war in Syria, even threatening to use our own military to respond to anyone who tries to attack al-Qaeda in the city … in Syria where they are in control of and have this stronghold,” she continued.

The MSNBC anchor asked if “the same could be said” for Gabbard’s meeting with Assad, which prompted Gabbard’s allegation that Harris fed the anchor questions.

Gabbard said “she would never apologize” for that meeting and noted that as president she would “do what is necessary,” even if that means meeting with a dictator.