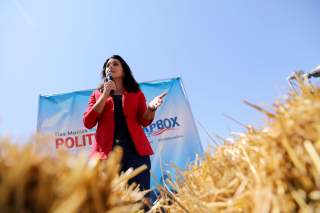 More than 35 new Democrats have publicly backed an impeachment inquiry since July, meaning a majority of House Democrats now support the effort to push out Trump, according to CNN.

Democratic presidential candidate Tulsi Gabbard opposes impeaching President Donald Trump even as members of her own caucus seek to remove him from office.

The Hawaii Rep.’s position puts her at odds with other Democratic presidential candidates who wish to see Trump impeached, namely Sens. Kamala Harris of California and Elizabeth Warren of Massachusetts. Roughly 57% of Americans want to see the Trump replaced, according to an August poll from Monmouth University poll.

“I don’t [support impeachment,]” Gabbard said in an interview set to appear Sunday. “You know, I think it’s important for us to think about what is in the best interest of the country and the American people, and continuing to pursue impeachment is something that I think will only further to tear our country apart.”

“Make no bones about it: We need to defeat Donald Trump,” she said. “But I think it’s important for our country’s sake and our future that the voters in this country are the ones who do that, and I believe that we will.”

House Judiciary Committee Chairman Jerry Nadler said in August that his committee has begun “formal impeachments proceedings” against Trump. The New York lawmaker told CNN that month that he “wasn’t waiting” for House Speaker Nancy Pelosi, who has not publicly supported impeachment.

More than 35 new Democrats have publicly backed an impeachment inquiry since July, meaning a majority of House Democrats now support the effort to push out Trump, according to CNN. Any such plan will likely come to naught, as the impeachment process ultimately runs through the Senate, which is controlled by the Republican Party.