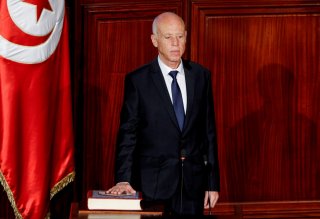 Four of Tunisia’s political parties have released a joint statement describing President Kais Saied’s actions as illegal and accusing him of attempting to create a dictatorship.

“We consider the president has lost his legitimacy by violating the constitution,” the statement read, “and he will be responsible for all the possible repercussions of this dangerous step.”

The statement was published by four of the country’s political parties—Attayar, Al-Jouhmouri, Akef, and Ettakatol—after Saied’s announcement on Wednesday that he would rule by decree and ignore the country’s 2014 constitution. That constitution was overwhelmingly approved by the country’s parliament three years after the overthrow of longtime dictator Zine el-Abidine Ben Ali.

While Tunisia has been regarded as the one unambiguous success story from the 2011 Arab Spring, persistent political and economic problems have remained below the surface, including high unemployment, social stratification, and income inequality, and the failure of the country’s parliament to enact meaningful changes. Frustration over these shortcomings led Saied to unilaterally suspend Tunisia’s parliament and assume total executive power over the country on July 25, initiating the current crisis.

Saied’s actions have also been harshly criticized by Ennahda, the largest political party in Tunisia, which has pursued a moderate form of Islamism. The party’s leader, Rached Ghannouchi, was speaker of parliament before its dissolution and has emerged as one of Saied’s most prominent opponents.

In comments to AFP, Ghannouchi described Saied’s actions as “a step back towards absolute one-man rule,” comparing Saied’s tenure to Ben Ali’s. Ghannouchi had underlined that there was “no longer any alternative to struggle,” and called on Tunisians to “take part in peaceful actions to resist dictatorship and return Tunisia to the path of democracy.”

Saied’s actions have also been condemned by the country’s powerful Tunisian General Labor Union (UGTT), which boasts more than a million members. The UGTT was one of the four organizations within the “National Dialogue Quartet,” which received the 2015 Nobel Peace Prize.

While Saied’s actions have engendered enormous controversy among the country’s ruling class and its Western partners, they have remained highly popular in public. According to some polls, more than eighty percent of Tunisians view his actions as necessary to reform Tunisia’s frozen political system.

Saied, a former constitutional law professor and jurist, was elected to the country’s presidency in 2019, with 72 percent of the runoff vote.