Turkey’s New Drone Base Is a Problem 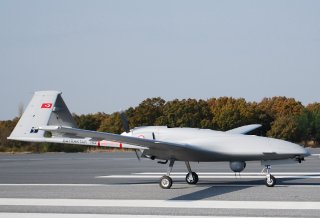 Addressing an audience of young people on May 19, 2021, Turkish President Recep Tayyip Erdoğan explained Turkish military interventions in Cyprus, the broader Eastern Mediterranean, and Iraq, as well as his support for Hamas. “Turkey is not 780 thousand square kilometers for us; Turkey is everywhere for us," he said. He then announced that, on July 20, he would visit northern Cyprus: “The messages we will give from Northern Cyprus concern not only the island but the whole world.” While Erdoğan hinted in his speech that he would announce a major gas find in Cypriot waters, he may also announce new unilateral moves on Varosha, a once-vibrant resort city evacuated against the backdrop of Turkey’s invasion and ethnic cleansing campaign.

Turkey invaded the island in 1974, and less than a decade later established a puppet state—the Turkish Republic of Northern Cyprus—in the occupied zone. While the United Nations Peacekeeping Force in Cyprus (UNFICYP) has now served on the island for more than a half-century, neither the UN nor various Western initiatives have resolved the key issue: Turkey’s continued occupation. While some Turkish apologists justify Turkey’s presence as protection to defend against supposed Greek ethnic cleansing, this ignores the fact that the Greek regime whose efforts to annex Cyprus sparked Turkey’s actions fell within days of the Turkish invasion rendering null any reason for Turkish troops to be on the island. The international community, meanwhile, continues to recognize the entirety of Cypriot waters to belong to the Greek Cypriot government.

While Erdoğan is prone to bluster, his current moves on Cyprus are different. On December 16, 2019, Ismail Demir, the head of Turkey’s Defence Industry Directorate, announced that Turkey had flown its first drones from the western Turkish province of Muğla to Lefkoniko Airport—or Geçitkale Air Base, as Turkey has restyled it. Turkey has continued to transform Lefkoniko into a drone base.  As Erdoğan explained, “now there are two airports in Cyprus, one is Ercan which our citizens in Turkey know, and another one that was there before but which now has a new name [Geçitkale] to which we transfer our unmanned aerial vehicles.”

Initially, Turkey used its northern Cypriot drone base to conduct surveillance as its seismic exploration vessels explored for gas and oil in Cypriot waters but, as it has upgraded Lefkoniko, it has moved many attack drones such as the Bayraktar-TB2 onto the base. Turkey has previously used the Bayraktar-TB2 against Kurdish targets in Iraq and against forces loyal to General Khalifa Haftar, head of the Egypt-backed, anti-Muslim Brotherhood force in Libya.

While previous versions of the drone only had an effective reach of 100 miles, upgrades to the guidance and operational systems greatly expand the drones’ range, especially given its 27-hour endurance. While Erdoğan has long railed against Israel and Egypt and sought to gain inroads into Lebanon and Gaza, his new drone base in occupied Cyprus now places each into his range. Turkey has already upended regional security by laying claim to Greek islands and infringing on the waters of not only Cyprus, but also Greece and the exclusive economic zone of Israel. The United States, European Union, Israel, and the moderate Arab bloc should expect Turkish aggression and violations soon to become much worse.

Deputy Secretary of State Wendy Sherman visited Ankara on May 28, 2021. In an interview with Hürriyet, she declared, “The relationship with Turkey is a very critical one to the U.S. Turkey is a NATO partner, a strategic ally, a force in the world….” Perhaps President Joe Biden, Secretary of State Antony Blinken, and Sherman believe such rhetoric will assuage Erdoğan, but they have it backward: Such praise convinces Erdoğan that the United States is weak and will bend to further aggression.

The United States is not without recourse. More than eight years ago, I warned that Turkey was seeking to jumpstart its own arms export industry at the same time the Obama administration was transferring American drones to Turkey. Many Turkish drones—including in all likelihood the Bayraktar-TB2—include either technology reverse-engineered from American drones or imported American components. Congress must act to prevent the further sale or transfer of any American computer or military components to Turkey. The impact of Turkey’s UAV actions are as dangerous to NATO as its use of the Russian S-400.

Secretary of State Mike Pompeo loosened the arms embargo on Cyprus to enable sale of non-lethal, defensive goods such as bulletproof vests. Turkey’s establishment of a drone base in occupied Cypriot territory should lead to scrapping the remainder of the embargo. Cyprus has no air force and so remains uniquely vulnerable Turkish drones at a time when Erdoğan appears intent to steal Cypriot natural resources. Biden, Blinken, and Secretary of Defense Lloyd Austin should immediately transfer to Cyprus Patriot Missile batteries to defend its territory and should also provide to Cyprus jamming technology to hamper if not bring down any drones launched from Lefkoniko. Simply put, Cyprus deserves the right to defend itself.

Kind words will not bring peace to the Eastern Mediterranean; the only strategy that will work in the region is to demonstrate to Erdoğan that Turkey has far more to lose from scrapping the status quo than it has to gain.