Is Turkey on the Brink of a New Syrian Military Operation? 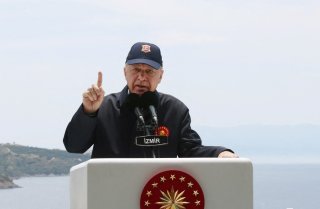 At a time when the international community is largely preoccupied with the Russian invasion of Ukraine, Turkey is once again bringing to the fore the likelihood of a military assault on northeastern Syria. The possibility of the long-spoken operation that would target the People’s Protection Units’ (YPG) presence has recently become an even more likely scenario following the Turkish National Security Council’s statement that was released on May 26. In parallel, President Recep Tayyip Erdoğan has been reiterating Ankara’s aim to clear Tel Rif’at and Manbij, two areas located on the western bank of the Euphrates River, from the YPG’s hold which has been deemed as the Kurdistan Workers’ Party’s (PKK) Syrian offshoot by Ankara. If carried out, this will be the third military operation directly targeting the group. It is also worth noting that the possible military operation into northern Syria is closely related to the ongoing Turkish military assaults against the PKK in the Kurdistan Region of Iraq (KRI).

As a matter of fact, Ankara has long been conceiving of the military operations against the PKK presence in northeastern Syria and the KRI as two different theatres of the same struggle. Indeed, it is no coincidence that Turkey’s insistence on a military incursion into northeastern Syria makes headlines a short while after the initiation of the Turkish Armed Forces’ (TAF) operation in the KRI. The TAF has been conducting a military assault against the PKK presence in the KRI since mid-April.

That being said, the possibility of a new Turkish military operation into northern Syria is largely coming to the fore, not due to the escalating security threats emanating from the Syrian theatre, but due to shifting geopolitical dynamics.

The Operation’s Timing and Enabling Factors

When considering the timing of the potential new operation into northern Syria, several key points stand out:

First and foremost, Turkey has accounted for the fact that Russia is very much preoccupied with the Ukraine invasion and, therefore, unlikely to show a great reaction in the face of a military incursion. It is known that the high toll of the Ukraine crisis has forced Moscow to withdraw some of its troops from Syria and relocate them to Ukraine. The areas that are vacated by Russia are being filled by Iran (and its proxies), the other staunch supporter of the Assad regime. Therefore, Turkey is at ease knowing that Russia is unlikely to be any real hindrance in the face of a military operation against the YPG presence in northern Syria. On the other hand, a military operation in Syria could also be favorable to Moscow in two ways. First, the possible operation may put more strain on Turkish-Western relations, creating a more favorable situation for Russia. Additionally, the possibility of a military operation may force the YPG to hand over some of the areas under its control to the Assad regime, an outcome the regime-Russia duo has long hoped for. In line with this aim, the Assad regime has sent reinforcements to Aleppo and President Bashar Al-Assad has boldly claimed that they will resist a Turkish attack. The commander-in-chief of the Syrian Democratic Forces (SDF), of which the YPG constitutes the backbone, has also shown a willingness to cooperate with the Assad regime in the face of an attack. Although Turkey would be content with the takeover of an area like Tel Rifat by the Syrian regime, the SDF insists that military cooperation with the regime would not mean the handover of any areas.

Ankara may also have deemed the present state of Turkish-Russian relations as ripe to initiate an incursion in Syria and realize its goal of establishing a 30 km deep safe zone. Apart from this, according to the agreement inked between Russia and Turkey in October 2019, following the Turkish offensive whereby Turkey seized a strip of land between Tell Abyad and Ras al-Ayn, the YPG had to withdraw from Manbij and Tel Rifat. Nonetheless, like many other agreements signed regarding the Syrian crisis, this agreement was not realized. Moreover, Russia’s ambivalent position vis-à-vis Turkey’s operation is also an encouraging factor for Turkey to carry out the operation. On the one hand, Russian foreign minister Sergei Lavrov stated that “Turkey cannot remain indifferent to developments in Syria,” an encouraging sign for Turkey. On the other hand, Russia’s Foreign Affairs Ministry spokeswoman Maria Zakharova articulated that Russia hoped Turkey would refrain from launching an attack, claiming that a new operation would deteriorate the situation on the ground. Russian special presidential envoy for Syria Alexander Lavrentyev also claimed that a new Turkish operation would be “unwise.”

Having said that, if Turkey launches an attack and takes control of Tel Rifat, an area where the YPG operates under Russian protection, this could be to Russia’s detriment as a takeover of the area would bring the Turkish-supported Syrian National Army (SNA) closer to the regime-held areas in Aleppo. For this reason, Russia is more likely to try to convince the YPG to hand over the area it holds to the regime as a measure to avoid Turkey’s operation.

Secondly, NATO’s recent enlargement bid through the accession of Sweden and Finland also provided Turkey with leverage regarding the possible military operation into northern Syria. It is well known that Turkey stood in opposition to these two countries joining NATO for some time and used this situation as leverage. As a matter of fact, Turkey was trying to negotiate with the United States on various files through the NATO accession issue. However, Ankara had been aware that its window of opportunity would not last forever. For these reasons, Turkey has been hopeful that a potential military operation into northern Syria, at this point in time, would not provoke any significant response from the United States, in particular, but also EU countries. Now that Turkey has removed its veto on Finland and Sweden’s accession to NATO, Turkey feel increasingly encouraged to initiate an operation into northern Syria.

Likewise, the Western reactions thus far—including the weak U.S. statements expressing concern—have only emboldened Ankara. Another issue bolstering Turkey is the fact that the SDF and the United States officially reject the YPG’s presence in Tel Rifat. The Afrin Liberation Forces—which deny ties to the YPG/SDF—operates in Tel Rifat and has been conducting operations targeting the SNA and TAF for a long time. Thus, a possible Turkish operation on Tel Rifat should not incite direct U.S. sanctions given the fact that it is not designated by the United States as an SDF-controlled area. However, this is not the case for Manbij. Manbij is officially designated by the United States as an SDF-controlled area. Namely, an operation in this area would likely provoke U.S. sanctions based on Donald Trump’s 2019 presidential decree which was later extended by the Biden administration. The civilian population is also low in Tel Rifat. Nevertheless, during Turkey’s Afrin operation in 2018, tens of thousands of people fled from the city and took refuge in the camps of Tel Rifat.

Apart from these, a military operation into Kobani alongside some other areas like Ain Issa and Tell Tamer, which are all located on the eastern bank of the Euphrates River, is also being voiced in Turkey. In the current conjuncture, an offensive on these areas does not seem very likely due to U.S. support for the SDF and the likelihood of an ensuing negative reaction from the West. Therefore, it can be said that the Euphrates River seems to be a natural border for a possible Turkish military incursion into northern Syria for the time being. Nonetheless, a protracted war of attrition between the SDF and Turkey-supported SNA is likely to continue to the east of the Euphrates River.

Hence, depending on these factors, the most likely target of a Turkish operation would be Tel Rifat. At a time when Turkey is normalizing its ties with different countries ranging from Saudi Arabia to Israel, Ankara is hopeful that the launch of a military operation in this area would not incite a severe negative reaction. Currently, Iran is the only country that may respond negatively and could hinder the operation through its proxies. Unsurprisingly, Iranian allied groups have already formed a joint operations room with the regime forces, and YPG in an attempt to fend off a possible Turkish operation.

Thirdly, Turkey’s potential operation is also justified by Ankara’s need to widen safe areas in northern Syria that can accommodate the Syrian refugees currently residing in Turkey. Well aware of surging xenophobic and racist sentiments within Turkey, Erdogan has announced an assertive settlement plan whereby a million Syrian refugees will be sent to Syria. Although this plan is fraught with various problems, the possibility of a military operation serves the ruling party’s promise to send Syrians back to their country in the run up to Turkey’s 2023 presidential & parliamentary elections. In this regard, the military operation rhetoric helps the ruling party consolidate its base.

Considering Turkey’s domestic political dynamics and changing geopolitical environment in response to the Ukraine conflict, it seems likely that Ankara will opt to initiate a new offensive in the areas located on the western bank of the Euphrates River in Syria unless the YPG/SDF make serious concessions to Russia and the Syrian regime in the upcoming period.