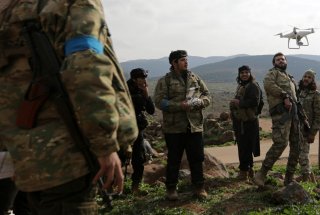 Turkey might never develop its own stealth fighter, but the country has become a major user, and seller, of an entirely different class of warplane.

Anka-S is roughly analogous to the U.S. Air Force’s own Reaper drone, which itself is a bigger variant of the iconic Predator drone.

TAI began developing Anka-S in 2013. The unmanned aircraft flew for the first time in 2016.

Around 26 feet long with a roughly 400-pound payload, the satellite-controlled Anka-S carries a synthetic-aperture radar, an inverse-SAR and a ground-moving-target-indicator radar to detect, identify and track ground targets.

The propeller-driven drone can fly for more than 24 hours straight and fire small, precision missiles including the Roketsan Smart Micro Munition and the Cirit 2.75-inch guided rocket.

The Turkish military operates around 130 armed drones of several types, including five versions of the Anka plus the Karayel and the Bayraktar TB2.

Turkey’s drones have helped to lead the country’s aerial campaign targeting forces loyal to the regime of Syrian president Bashar Al Assad. On March 1, 2020, Turkish drones struck Syrian forces in and around the city of Idlib, killing 19 people, according to the United Kingdom-based Syrian Observatory for Human Rights.

The deadly air strike was part of a wider operation targeting the Syrian regime’s air-defenses. Turkish drones and manned warplanes have made quick work of many of the regime’s Russian-supplied Pantsir air-defense vehicles. Videos that have circulated on-line depict Turkish drones firing precision-guided missiles to destroy idling Pantsirs.

“Only sophisticated [electronic-warfare] capabilities that are matched with robust radar-warning and air-defenses can potentially tackle this threat,” drone expert Samuel Bendett told The National Interest. Bendett is an analyst with the Washington, D.C. Center for a New American Security.

Russian forces, which arrived in Syria back in 2015 in order to bolster the regime, have deployed sophisticated defenses against rebels’ drones, including radars, short-range guns and missiles and radio-jammers that can disrupt drones’ command signals and data-links.

The Russian defenses have proved to be effective against small, off-the-shelf drones. It’s unclear that the same defensive systems would work against Turkey’s own drones, which are much larger, faster and more heavily armed than the commercial models are.

“Russians are yet to deal with sophisticated drone attacks in Syria,” Bendett said.

But Ankara isn’t taking any chances. It has steered its drones around areas defended by Russian missiles and guns, Bendett pointed out.

Turkey’s dramatic embrace of armed drones signals an alternative approach to building up meaningful air power at a time when the most advanced manned aircraft are becoming increasingly difficult for middle powers to acquire.

Turkey prior to 2019 was a member of the multinational group developing and building the F-35 stealth fighter. But Ankara’s insistence on buying Russian-made air-defense systems resulted in the F-35 program ejecting Turkey as a member and canceling its order for as many as 100 F-35s.

The leading alternative to the F-35, Russia’s Su-57, remains an unproven prototype. The Turkish government in mid-2019 announced it would develop its own stealth fighter, but the high cost of such an undertaking make it highly unlikely to succeed.