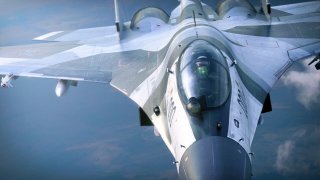 In recent weeks, reports have made clear that Ankara stands ready to purchase 36 of Russia’s 4.5-generation Su-35S fighter (down from an earlier suggested 48)—heralding a potential sea-change for a country which has operated American jet fighters from the F-84 Thunderjet to the F-16 Fighting Falcon since the 1950s.

Turkey had been looking to replace its Terminator 2020 jets—heavily modernized F-4 Phantoms—with F-35 Lightning stealth fighters, which it was also building components for.

But due to its purchase in the summer of 2019 of Russian S-400 air defense missiles which had the potential to compromise F-35 stealth, Turkey was kicked out of the F-35 program. Turkish manufacturers of F-35 parts also lost $9 billion in projected business.

The expulsion arose out of a long-running growing tensions between Turkey and its NATO partner due its President Recep Erdogan’s increasing authoritarianism, desire to eradicate Kurdish separatist stronghold in Syria which have provided key support to U.S. forces in Iraq and Syria, and use of political hostages in bids to extract international concessions.

Moscow, meanwhile, has no objection in principle to authoritarian leaders, and appreciates Turkey adopting a less adversarial stance to Damascus. Thus, in the wake of Turkey’s recent offensive against Kurdish fighters, Russian and Turkish troops have begun joint patrols in Syrian territory.

Following denials about Su-35 purchase from some Turkish officials, on November 5, Erdogan effectively issued an ultimatum: “"If the F-35 issue is not resolved [by Washington], we will take the necessary steps.”

The Su-35S Flanker-E is a highly capable twin-engine 4.5-generation multi-role fighter, arguably a bit ahead of comparable U.S. Air Force F-15C Eagles. Though it lacks a more discrete and jam-resistant AESA radar like those found in the latest U.S. fighters, it’s has superior maneuverability due to its thrust-vector engines, newer electronic warfare defenses, and can carry more missiles. (The latter two advantages might even out if the Air Force decides to replace the F-15C with the more advanced F-15EX.)

However, the “you get what you pay for” factor with older Russian jet fighters has related to reliability and maintenance costs.

But for all its agility and power, the Su-35 is not stealth fighter and Turkish officials continue to maintain they would prefer to receive their 100+ F-35s they ordered.

A stealth jet is much more effective at penetrating defended enemy airspace; and while the F-35 may not be as agile an Su-35, its low observability would still likely afford it the first shot in an air battle.

Reports indicate that just a month after being expelled from the F-35 program, Erdogan began negotiations to purchase fighters from Russia.

They even jointly inspected an Su-35 and an Su-57 stealth fighter at the 2019 MAKS air show.

“Are we going to buy this one?” Erdogan asked, pointing at an Su-57.

The Russian leader replied, “You can.”

Turkish official earlier expressed interest in a Russian offer to sell Su-57 ‘Felon’ stealth fighters even before the F-35 fell through, though negotiations for the more advanced jet are apparently proving more complicated.

A Fork in the Road

Turkey’s decision to buy, or not to buy, Su-35 will fundamentally be about politics, not modest differences in performance, nor more substantial differences in unit cost. That’s because in part because switching to nominally cheaper Russian jets will come with substantial inconveniences and additional costs.

Russia has also clarified it’s offering its Su-35’s off-the-shelf—that is without any of pricy tailoring necessary to adapt it to use Turkey-specific weapons and avionics. That means Turkey would have to acquire a wide range of Russian weapons and external stores it has never stocked or used before, which means continuous investments in Russian hardware and trainers.

Alternately, it could spend millions of dollars per plane modifying avionics with domestic alternatives compatible with the Western munitions Turkey usually relies upon.

To be fair, Russia has apparently agreed to licensing some Turkish production of non-essential Su-35 parts, which may ease the logistical pain somewhat.

Nonetheless, like a jilted lover conspicuously parading their latest infatuation, a large part of Ankara’s noisy embrace of the Su-35 is undoubtedly an attempt to convince its NATO partners, and Washington in particular, that it’s absolutely just fine with turning towards Russia if Washington doesn’t sell it F-35s.

However, reports that Turkey may be on the brink of ‘going Russian’ for its Air Force will almost surely backfire by reinforcing the growing belief that Erdogan’s Turkey is no longer a reliable ally (not that Washington is lately in a position to cast stones on that charge.)

Currently, the Trump administration has successfully vetoed, walked back and otherwise tamped down Congressional efforts to place sanctions on Turkey, but it may not be able to do so indefinitely.

What about Turkey’s stealth jet dreams?

Russia also claims it would be open to selling a customized Turkish variant of its Su-57 stealth fighter according to Jane’s. Though that means it would likely be an export model without the most sensitive technologies, it also implies Turkey could arrange for their variant to be interoperable with some Western weapons (an arrangement India has implemented in its own Su-30MKI Flankers.)

Turkey will also undoubtedly hope any Su-35s and especially Su-57s its receives could be studied to assists its domestic TAI TF-X stealth fighter program. Though supposedly set a for a first flight in 2023, multiple international partners have withdrawn from the project, unwilling to transfer as much technology as Turkey wanted and perhaps weary of deteriorating diplomatic relations.

Russia may also be averse to the technology transfer, having been upset when China blatantly reverse-engineered license-built Su-27 Flanker jets and began mass-producing them without a license. In an inverse of current NATO fears surrounding the F-35, Moscow may also be weary that Turkey could transfer Russian technology back to other NATO countries.

Turkey is already demanding technology transfers as prerequisite for ordering a second batch of S-400 missile systems—a condition which remains under negotiation.

Still the Su-35 deal, and the more nebulous-seeming Su-57 collaboration, highlight the bizarre three-way relationship between Turkey, its NATO allies, and Russia.

Turkey’s most obvious use for the capability of an air superiority fighters would be in a hypothetical conflict with Russia, or against Russia-backed Syria. Admittedly, Ankara may also wish the brandish the Su-35 versus fellow NATO member Greece, with which it has a fought mostly non-lethal aerial skirmishes for decades.

Currently, NATO and Russia view each other as the primary threat to each other’s security. Thus, when Turkey purchase top-shelf weaponry designed for use against NATO from NATO’s chief adversary, it places itself in contradiction to the purpose of that alliance.

Thus a commitment to purchasing Su-35s could herald a broader and longer-lasting detachment of Turkey from its NATO allies.