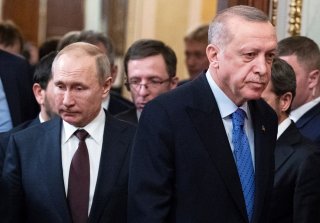 Turkish president Recep Tayyip Erdogan warned Russian leaders on Wednesday that a military intervention in Ukraine would “not be a wise act” to pursue, appearing to signal Ankara’s disapproval of a potential Russian invasion.

“I hope that Russia will not make an armed attack or occupy Ukraine. Such a step [would] not be a wise act for Russia or the region,” Erdogan said in an interview with Turkey’s NTV news channel.

Erdogan clarified, however, that Russia’s security interests could not be dismissed, and insisted that they should be seriously considered as part of any final settlement of the Ukraine issue.

“There is a need for dialogue that will listen to Russia and eliminate their reasonable security concerns,” he said, adding that he had made Turkey available as a neutral ground for negotiations between Russia and Ukraine.

Erdogan also indicated during the interview that he had supported ongoing diplomatic efforts between Russia, the United States, NATO, and Ukraine to resolve the border crisis.

The ongoing crisis has steadily escalated since November 2021, when reports circulated indicating a Russian troop buildup along the Ukrainian border. More than 100,000 Russian troops have since been deployed to the border.

While Russia has insisted that it is not planning to invade Ukraine, Western nations have reacted with caution, increasing shipments of arms and military equipment to Kiev, preparing sanctions against Moscow in the event of an invasion, and in some cases, authorizing the departure of nonessential diplomatic personnel at their embassies.

Leaders in the Kremlin have justified the troop buildup by claiming that NATO’s expansion into Eastern Europe represents a direct threat to Russian national security. They have offered to resolve the crisis if NATO commits to not allowing Ukraine to join and curtails its military exercises in the east. NATO officials have declined these proposals.

In his interview, Erdogan hinted that some of Russia’s demands were not reasonable, but indicated that they could be resolved through comprehensive negotiations. He said that Turkey would be prepared to “do whatever is necessary” to end the crisis – a message he relayed to both Russian president Vladimir Putin and Ukrainian president Volodymyr Zelensky.

“I think both countries are aware of the sincerity and good intent of Turkey,” Erdogan said.

Turkey has a deep and complicated relationship with Russia. Although the two nations have worked together extensively on political, economic, and security issues, they have backed opposite sides in a number of regional conflicts, including the war in Syria on Turkey’s southern border.

Ankara has also sold military drones to Kiev in recent years as Ukraine fights against during secessionist rebels in the Donbass region, a move that angered Moscow.