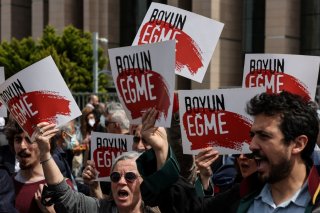 A Turkish court has sentenced Osman Kavala, a prominent philanthropist and activist involved in Turkey’s pro-democracy movement prior to his arrest in 2017, to life in prison after convicting him of attempting to overthrow the government of President Recep Tayyip Erdogan.

Following a four-year judicial process, the court found Kavala guilty of involvement in Turkey’s nationwide protest movement in 2013, in which the activist had participated as the leader of Turkey’s branch of the Open Society Foundations. That organization, founded by prominent Hungarian-American financier George Soros, was banned in Turkey after the protest movement. Kavala was initially charged with leading the protests in 2017; after a lengthy trial, he was found innocent in 2020 but was immediately re-arrested and accused of participating in Turkey’s abortive coup in the summer of 2016.

Kavala has denied all charges against him and accused the Erdogan government of conducting the trial for political reasons. The European Court of Human Rights (ECHR) has agreed, claiming that Kavala’s arrest was primarily intended to “silence him and dissuade other human rights defenders.” As Turkey is a member of the ECHR, it is theoretically required to follow the group’s rulings, but it has ignored rulings demanding Kavala’s release because the ECHR has no mechanism to enforce its decisions.

In his final statements to the court on Friday, Kavala criticized the case against him, insisting that the charges were “not plausible” and arguing that the trial had been built on “evidence that is not evidence,” referring to confidential evidence not made publicly available.

“My only consolation is the possibility that my experience will contribute to a better understanding of the grave problems of the [Turkish] judiciary,” he said.

Human rights groups sharply criticized the verdict, with Nils Muiznieks, the European director of Amnesty International, characterizing it as a “travesty of justice of spectacular proportions.”

“This verdict deals a devastating blow not only to Osman Kavala, his co-defendants, and their families but to everyone who believes in justice and human rights activism in Turkey and beyond,” Muiznieks wrote.

The United States also condemned the verdict. In a statement, State Department spokesman Ned Price described it as an “unjust conviction … inconsistent with respect for human rights, fundamental freedoms, and the rule of law.”