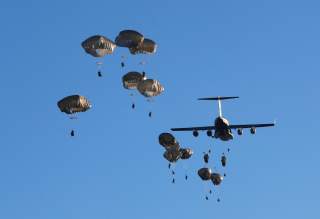 Twenty-two paratroopers were injured Wednesday after a night-time military exercise went wrong, and authorities say they aren’t sure what caused the accident.

The jump caused several of the paratroopers to become stuck “in the trees,” according to Sangster. None of the injures are life-threatening, although some people suffered limb injuries, ABC 15 reported.

Weather during the night-time jump was “fair” and the aircraft landed safely. Eighty-four members should have been a part of the military exercise, which was the first day in a 10-day training event. In total, 650 soldiers were intended to take part in the training block at Camp Shelby.

“Airborne Operations all bear an inherent risk,” the 4th Brigade Combat Team, 25th Infantry Division said on Facebook Wednesday. “We strive to mitigate this risk as much as possible.”

“Once all Soldiers have been accounted for, our goal is ultimately to continue training. Despite the challenges that we currently face, Soldiers always place the mission first.”