Two U.S. Navy Aircraft Carriers Are Patrolling Near Iran. Is That Too Many? 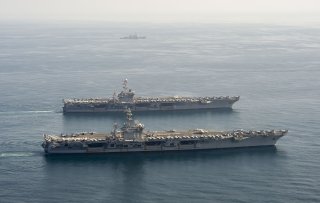 The U.S. Navy has deployed two of its precious nuclear-powered aircraft carriers to the Persian Gulf as part of a wider surge in forces the Pentagon hopes will deter attacks by Iran.

But keeping two of the fleet’s 11 flattops in the Gulf could strain the fleet. It’s happened before, David Larter noted at Defense News.

For two years starting in 2010, the Navy kept two carriers in the Middle East in order to keep up the pressure on Iran ahead of negotiations that ultimately led to Pres. Barack Obama’s 2015 deal with Tehran to limit the latter’s nuclear-weapons program.

The administration of Pres. Donald Trump canceled the nuclear deal, a decision that incentivized Iran to continue work on atomic weaponry and directly led to the current tension.

U.S. forces and Iranian proxies periodically have exchanged blows since Jan. 3, 2020, when an American drone assassinated Iranian Revolutionary Guard Corps leader Qasem Soleimani while the general was traveling near Baghdad.

The two-carrier surge in 2010 “exacted an enormous toll on the service, with Navy leaders warning it was unsustainable,” Larter explained.

To keep two flattops in the Gulf while still meeting the demand for carriers in other regions, the U.S. fleet extended carrier deployments from the standard six months to nine months or longer.

The resulting wear and tear and crew fatigue “nearly broke the Navy’s ability to project power with its carriers,” Larter wrote.

The current surge began in early March 2020 when U.S. Defense Secretary Mark Esper signed off on the two-carrier deployment. “We’re going to keep them for a while,” U.S. Marine Corps general Frank McKenzie, head of U.S. Central Command, told reporters.

In addition to deploying the carriers USS Harry S. Truman and USS Dwight D. Eisenhower and their escorts, the Pentagon also sent to Iraq batteries of U.S. Army Patriot surface-to-air missiles as well as shorter-range air-defenses.

The Navy assault ship USS Bataan and its amphibious ready group also is in the Middle East supporting an embarked force of 2,500 Marines.

But the carriers are the wrong ships for the job, Bryan Clark, a fellow at the Hudson Institute  in Washington, D.C., told Larter. “It’s an asinine strategy,” Clark said. “The Iranians don’t perceive carriers and a threat to their ability to project power because they project power through gray zone activities and terrorism — the kinds of things that carriers aren’t very good at dealing with."

“And when they are inside the Persian Gulf, the Iranians perceive them as being an easy target. They can range the entire gulf with shore batteries along the coast in caves and other terrain where it’s hard to root them out. So the Iranians see the carrier as a way to get the Americans to spend a lot of money on a show of force that doesn’t really impact their strategic calculation.”

It’s worth noting that the United States isn’t the only country surging forces into the Persian Gulf. Middle East countries including the United Arab Emirates, Saudi Arabia, Bahrain, Qatar, Kuwait have joined Australia, the United Kingdom and the United States to monitor commercial shipping in the Gulf under the auspices of Operation Sentinel.

Meanwhile, Belgium, Denmark, France, Germany, Greece, Italy, The Netherlands and Portugal have formed a joint naval force to patrol the Strait of Hormuz, the entrance to the Persian Gulf.

All other calculations aside, the worsening coronavirus pandemic could force the U.S. Navy’s hand. The fleet already has sidelined one carrier, USS Theodore Roosevelt, in Guam after more than a dozen crew members tested positive for the virus. It’s only a matter of time before the virus affects U.S. forces in the Persian Gulf.