Type 15 Tank: How China Would Wage War All Over Asia 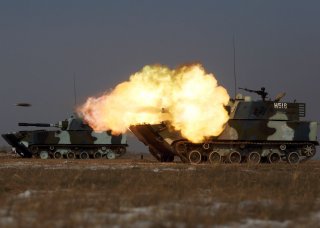 Although the United States Marine Corps is officially retiring all their tank battalions in an effort to focus on a future conflict in the Pacific, China is moving in a different direction—more tanks that are lighter, nimbler, with a smaller footprint than their predecessors.

The Type 99 is arguably China’s premier main battle tank. It has a 125-millimeter main gun, explosive/reactive armor, and an autoloader. It could probably compete on the same level as the best tanks in Russia, or perhaps the M1 Abrams. One of its drawbacks? It is heavy—at fifty-eight tons, mobility over wet and swampy terrain, in mountainous areas, and over bridges and other infrastructure quickly becomes complicated.

Clearly the trend in tank design has been heavier and larger. But high curb weight is not always an advantage—especially in preparing for a fight in the Pacific, where tanks have to be brought from ship to shore, and compact beach areas quickly fill up with men and machines, favoring vehicles with a smaller footprint. Here is China’s light tank, and what we know about it.

Where the larger Type 99 is heavy, the Type 15 is light, where the 99 is large, the 15 is small. Though the small Type 15 platform has a modest 1,000 horsepower engine, its low thirty-three-ton standard curb weight allows it to be both speedy and have a surprisingly high range. Though the Type 15 has a relatively small 105-millimeter main gun, the gun’s lighter weight and smaller size fits with the Type 15’s potentially nimbler mission profile. Combined with advanced armor-piercing fin-stabilized sabot rounds, the 105mm gun could still pack a potent punch.

The South China Morning Post quoted a Chinese Defense Ministry spokesperson as stating that the Type 15 tank had officially been fielded into the People’s Liberation Army (PLA) service back in 2018. Since then the tank has remained rather scarce—until just recently.

The Type 15 was seen earlier this summer during the recent border skirmish between Chinese and Indian troops along the Line of Actual Control, a loosely demarcated line separating India and China’s competing territorial claims in the Himalayas. The high-altitude area favors lighter, more mobile platforms for dealing with the extremely steep and rugged mountainous terrain—just one of two environments the Type 15 excels in.

The other geographically-significant area the Type 15 could be used in? The Pacific. The PLA Marine Corps specifically stands to benefit from the lighter Type 15. Like America’s premier force-in-readiness, so too does Beijing regard their Marine Corps as a hardy, ready-to-fight branch.

Though the PLA Marine Corps does have a credible ship-to-shore capability that might even outclass the United States, a light tank purpose-built for helping to secure austere beachheads after an initial foothold is established is something that the PLA could benefit from. This is where the Type 15’s light weight would be extremely beneficial and it is not hard to imagine possible targets. Taiwan? Other islands in the Pacific? Potential applications in the Pacific for a light tank are numerous.

As I’ve previously written, a Chinese invasion of Taiwan would be costly in terms of both blood and treasure—but has the potential to succeed, despite stiff Taiwanese resistance. The same goes for territorial disputes involving Beijing in the South China Sea. Wherever the guns start firing though, expect to see Type 15s on the beach once the smoke clears.