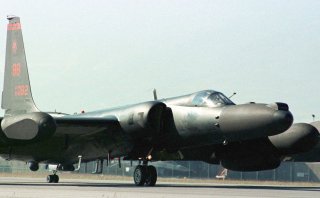 To the extent that most Americans know anything about the U-2 spy plane, they know that it was used for reconnaissance over the Soviet Union and that one U-2 pilot, Francis Gary Powers, was shot down in 1960. Powers spent nearly two years in Soviet captivity; he was eventually released in February 1962, in exchange for captured Soviet spy Rudolf Abel. The sequence of events surrounding the exchange was dramatized in the 2015 Steven Spielberg film Bridge of Spies.

One detail that was left out of the film was the unhappy fate of Lt. Sergei Safronov, a MiG-19 fighter pilot tasked with intercepting Powers.

During its development and first flights in the 1950s, the U-2 spy plane was distinct for its enormous wingspan; the plane stretched more than one hundred feet from tip to tip. This incredible wingspan, combined with the plane’s powerful engines and light weight, allowed it to fly at a tremendous height; it could reach seventy thousand feet and above, far beyond any other nation’s ability to shoot it down.

However, after the U.S. Air Force began to run U-2 flights over the Soviet Union, it became immediately clear that the Soviets were trying. At first, they flew squadrons of MiGs underneath, trying to obstruct the view of the plane’s cameras; later, the first missile launches began, and although they could never reach the U-2 plane’s height, they grew progressively closer as Soviet missile technology advanced. By 1960, U.S. planners realized that the U-2 spy plane was in imminent danger of being shot down, and the missions were ceased—but one final mission was scheduled, the one that brought Powers and Safronov tragically together.

Once Powers’s U-2 spy plane entered Soviet airspace, Safronov and his flight leader, Capt. Boris Ayvazyan, were dispatched to intercept it. This was a redundancy; the plane was already being targeted by Soviet surface-to-air missiles, and before the two of them arrived, the plane had already been successfully shot down by the S-75 “Dvina” system. However, because large chunks of the plane were still airborne, it was recorded on Soviet radar as continuing, and additional missiles were fired.

Ordinarily, the MiG-19 planes that Safronov and Ayvazyan flew would have been equipped with “identification, friend or foe” transponder codes, informing ground forces that their planes were friendly and should not be targeted. These systems are used on nearly all modern planes, to prevent friendly fire incidents.

To ensure security, these codes were changed each month. However, because May 1 was May Day, an official Soviet holiday, the transponder codes on the two planes had not yet been updated, and Safronov’s MiG was identified as a foe by the missile operators. The MiG received a direct hit, and although Safronov managed to bail out, he died of his injuries within hours.

Safronov posthumously received the Order of the Red Banner, along with the missile operators that had shot Powers down. However, the Russian press censored news of his death; it was only during the glasnost era of Mikhail Gorbachev that the unlucky pilot’s fate was acknowledged.