UFO's or Drones: What Is 'Swarming' U.S. Navy Warships? 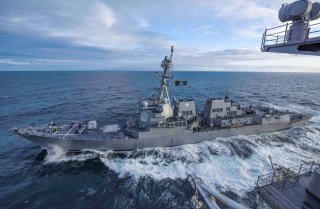 The Navy, Coast Guard and FBI have pursued a “high-level investigation” into a series of incidents that took place around California’s Channel Islands in the summer of 2019, when, as according to a story published by The War Zone, “groups of unidentified aircraft . . . pursued that service’s vessels.”

The incident, which took place miles off the California coast, entailed as many as six aircraft “swarming” the ships over the course of two nights, even in low-visibility conditions. It was first reported last year, when filmmaker Dave Beaty, who is also a UFO researcher, took notice of incidents involving the Arleigh Burke-class destroyer USS Kidd.

The War Zone reporters Adam Kehoe and Marc Cecotti have obtained new documents, via a Freedom of Information Act (FOIA) request, including the deck logs from the relevant time, as well as automatic identification system ship location data.

It has been determined that the 2019 events affected not only the USS Kidd, but also the USS Rafael Peralta, USS Russell, USS John Finn, and the USS Paul Hamilton.

Findings show that the incidents began on July 14, with the sighting of a pair of Unmanned Aerial Vehicles, or drones, that were spotted by the Kidd. It notified Rafael Peralta and John Finn, which also reported such activity. The Peralta later noticed “a white light hovering over the ship's flight deck.”

“The log reflects that the drone managed to match the destroyer's speed with the craft moving at 16 knots in order to maintain a hovering position over the ship’s helicopter landing pad. To further complicate what was already a complex maneuver, the drone was operating in low visibility conditions (less than a nautical mile) and at night,” the report said.

The incidents caused the ships to activate its Ship Nautical Or Otherwise Photographic Interpretation and Exploitation team, also known as its “SNOOPIE team.”

The drones purportedly appeared at a time when few civilian ships were nearby, so it’s unclear exactly where they came from. It’s also unclear who would have access to drones that could stay in the air for as long as ninety minutes.

The War Zone also reported on a set of “major incursions” that took place the following night, July 15. The Rafael Peralta reported the drones first, with the Kidd and other ships following.

The logs included references to “drones dropping in elevation, and apparently moving forward and backward, left and right” as well as a call from a passing cruise ship letting the Rafael Peralta know that the drones weren’t theirs.

A government investigation soon began, with the NCIS and FBI both taking part. It was thought for a while that the drones had come from a ship called the ORV Alguita, but the owners of the ship stated that the drones they had on board couldn’t have traveled very far, and wasn’t close to the ships in question at the time.

The last of the emails included in the FOIA was in late July of 2019, so it’s not known what the Navy and the other investigators determined about the origin of the drones. No results of the investigation were ever announced publicly.

But then, there were further reports of drones on July 25 and 30th of that year.

“At the time of writing, we do not have complete deck logs for the month of July except for USS Kidd, so it remains uncertain if other ships also continued to have drone encounters later in the month,” according to Kehoe and Cecotti.

“It is unclear why anyone would operate drones near Navy warships in such a brazen manner,” the two reporters said. “Commercially available drones are not commonly capable of flying for such long durations across great distances with speeds in excess of 45 miles an hour. Based on the pooled data available from the deck logs, we estimate the drones traversed at least 100 nautical miles in the July 14th incident.”

This raises many questions: Who has that many drones, and can coordinate them simultaneously, much less near warships? Was it a foreign government? Or something related to a classified program, as speculated by The War Zone, which may be tested at San Clemente Island? And why the secrecy, and no official report about the incidents?

“If the drones were not operated by the American military, these incidents represent a highly significant security breach,” the reporters noted. “If they were part of some kind of covert action, it is nonetheless unclear why they were flown so openly and so frequently in almost a harassing manner. More troubling still, if a foreign state actor was involved, where exactly were the drones launched from?”

Of course, there’s one another possibility.

The War Zone does not use the acronym“UFO,” but some of the media coverage based on it has used it. The New York Post went with the headline “UFOs Harassed US Warships Off California.” The Daily Mail went with “Swarms of flashing ‘Tic-Tac shaped’ UFOs chased four US Navy destroyers off California coast at 45 mph and hovered above them at night for WEEKS.”

Beaty, the filmmaker who came forward about the incidents back in 2019, quoted a Navy veteran on the USS Kidd who said that “I know he said he could see them with the naked eye and they were almost eye level with the bridge hovering. They were the same tic-tac-shaped objects.”

The Pentagon is reportedly getting ready to issue a new report about UFOs, the Trump-era director of national intelligence John Ratcliffe said this week in a Fox News interview.