The U.K. and Canada Should Quickly Negotiate a Free-Trade Deal 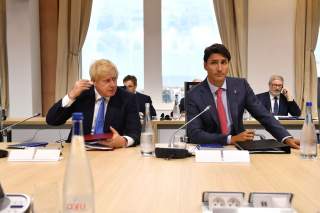 The hard work now begins for the United Kingdom to shape an independent trade policy outside of the European Union. Brexit has finally happened after more than three years of negotiations, posturing, parliamentary shenanigans, two elections and considerable policy uncertainty.

As the New York Times reports, the U.K. faces complex and arduous negotiations trying to maintain its privileged access to 450 million European consumers with zero tariffs or other trade restrictions.

It’s crucial for the U.K. to negotiate and sign some sort of trade agreement with the EU as soon as possible because the transitional period ends on Dec. 31, 2020. After that date if there are no deals, the British will lose their preferential access to that important market. This will significantly disrupt trade flows and supply chains that are vital to the U.K. economy.

The EU is critical but the U.K. is also looking to sign trade deals with other countries — perhaps none more important for the British economy than one with the United States.

But a deal with the Americans is at best a few years away and will not come easy, even though the U.S. is an important partner for the U.K. and there has been a lot of discussion about such a deal.

There are many significant road blocks to such a deal — Donald Trump’s administration is more about protectionism than it is about trade agreements, and it will be extremely difficult to negotiate as the president focuses on re-election. Witness the tumultuous and prolonged negotiations over minor improvements to the NAFTA agreement.

Even if Trump is defeated in November, the Americans have not been able to negotiate a deal with the EU. Talks started in 2013 and were suspended in 2016. The lack of results stemmed from challenges on both sides but does not bode well for a desperate and less economically powerful U.K. to be able to make headway with the U.S.

Meanwhile, the U.K. has other important trade policy challenges to resolve. Not only do the British lose privileged access to the EU on Dec. 31, but they also lose preferential access to all the countries and trading blocks with which the EU currently has agreements.

The EU has trade deals fully implemented, or partially in place, with 88 countries, including Canada. Many of these agreements are with small economies, but the point is that due to Brexit, the U.K. will lose all the preferential access it’s enjoyed as a member of the EU.

The U.K. must negotiate agreements with these 88 countries simply to maintain its current trade relationship.

But British officials don’t have experience or capacity to effectively negotiate multiple new trade agreements and will already have their hands full negotiating with the EU. This is where Canada comes in.

Canada has an important and comprehensive agreement with the EU called CETA, short for the Canada-European Union Comprehensive Economic and Trade Agreement. CETA is a cutting-edge and modern trade agreement that is comprehensive in its coverage. It also contains progressive commitments to promote labour rights, environmental protection and sustainable development.

CETA provides the perfect template for the U.K. to adopt and use as a model for future bilateral agreements after finalizing a free-trade agreement with Canada.

Obviously, the U.K. urgently needs to complete a deal with the EU first and foremost. But a deal with Canada should be its second priority. Not only can CETA provide a model for a U.K.-EU deal, it can also be the template for the Canada-U.K. deal.

The U.K. can get an early and relatively easy win by completing a new trade agreement with Canada. The two countries, in fact, have already agreed informally to move forward on a Canada-U.K. agreement built on CETA.

Along with Dylan Klemen of the University of Calgary’s School of Public Policy, I have argued that this would be an important win for Canadian trade policy as well. The U.K. is Canada’s fifth largest trading partner, and was its largest trading partner when it remained in the EU. The U.K. is Canada’s second largest source of foreign direct investment, and the second largest foreign destination for Canadian investors.

The following graphic shows Canada’s 10 most valuable exports (in terms of product groups) to the U.K. over the last five years. Exports of gold are sizably larger than Canada’s other top exports to the country.

With Brexit, Canada lost one of its key objectives in signing CETA in the first place — free trade with the U.K.

Prime Minister Justin Trudeau began informal discussions on free trade with former British prime minister Teresa May, and recently confirmed his commitment to a trade agreement between the two countries under Boris Johnson.

For Canadian trade policy, there is another reason to move quickly with a CETA-based agreement with the U.K. — and another reason to believe the agreement will be easy to complete. And that’s the opportunity for Canada to move forward with its diversification strategy and achieve its progressive trade objectives.

The U.K. and Canada should quickly negotiate a free-trade deal with strong environmental and labour provisions modelled closely after CETA.

Free trade with Canada provides an early and relatively straightforward win for the U.K. as well as a win for Canada’s trade diversification strategy and progressive trade agenda. It’s also important that both countries complete a deal to avoid disruptions to the flows of trade and commerce between the two countries.